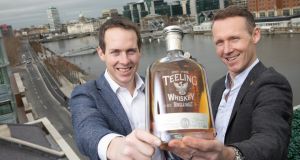 Teeling Whiskey founder and managing director Jack Teeling (right) said the company would look to build on the win.

Teeling Whiskey received the award at a ceremony in the Honourable Artillery Company in London on Thursday. It is the first time an Irish whiskey has been named as the world’s best single malt.

At the awards, Teeling Whiskey overcame competition from whiskey industry leaders from Scotland and Japan to take the number one prize.

Teeling Whiskey said single malt is considered the “gold standard” of world whiskey due to its production process as well as its character and flavour profile.

The single malt category has become synonymous with Scottish whiskey and more recently has been the style of whiskey driving the emergence of Japanese whiskey and other new age whiskey producing regions.

Teeling Whiskey founder and managing director Jack Teeling said the company would look to build on the win.

“Since reviving our old family trademark of Teeling Whiskey back in 2012 we have endeavoured to make sure every bottle of Irish whiskey we release with our family name on it is of the highest quality,” he said.

“To be honoured as the World’s Best Single Malt and in the process become the first Irish whiskey to ever have achieved such world-wide acclaim is very humbling and reflects the global resurgence and revival of both Teeling and Irish whiskey.

“We are now right back at the top table of global whiskey and we look forward to continue leading this new golden era for Irish whiskey.

“We are also extremely proud of the team we have created, and this award is testament to the creativity, hard-work and dedication of our staff both here in Ireland and around the world, and I would like to thank them all for helping us achieve this ambition.”

1 Covid-19 has shown that much of ‘normal’ life should have been binned years ago
2 Johnny Ronan loses out in court battle on 13-storey docklands plan
3 ‘Lockdown lobby’ needs to explain why this time would be different
4 New hotel planned for Dublin’s Liberties
5 Pfizer to seek FDA approval for Covid-19 vaccine in November
6 Looking to postpone your tax payment? Revenue sets December deadline
7 Irish retailers are not hotbeds of Covid-19 infection, figures suggest
8 Irish regulator probes Facebook's handling of children's data on Instagram
9 Budget 2021: fuel prices rise and high-emission cars hit
10 Number of houses for sale falls to 14-year low
Real news has value SUBSCRIBE