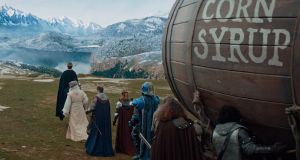 A scene from the Bud Light ad

MillerCoors is suing rival Anheuser-Busch, claiming the maker of Bud Light spent more than $13 million on a Super Bowl ad campaign designed to frighten people away from its Miller Lite and Coors Lite brands by deceiving them into thinking they’d be consuming corn syrup and high-fructose corn syrup.

“To be clear, they will not,” MillerCoors said in a federal complaint filed in Madison, Wisconsin.

MillerCoors, which was acquired by Molson Coors after AB InBev took over rival SABMiller in 2016, says Anheuser-Busch “singled out MillerCoors’ use of a common brewing fermentation aid, corn syrup,” to fool consumers who don’t know the difference between that and high-fructose corn syrup, a controversial sweetener used in soft drinks that’s been blamed for a surge in obesity.

“The recent Bud Light campaign is truthful and intended to point out a key difference from Miller Lite and Coors Light,” a spokeswoman for AB InBev said by email. “MillerCoors’ lawsuit is baseless and will not deter Bud Light from providing consumers with the transparency they demand.”

1 Who are Ireland’s 17 billionaires?
2 Are there annual limits on inheritances or gifts to a child?
3 Fianna Fáil may have just pressed the pause button on the property market
4 UK to prioritise EU trade deal over one with United States
5 O’Flynn ‘very unhappy’ with extra payments to former employee, court hears
6 Eason puts Blanchardstown store on market at €16m
7 My father in a nursing home wants to gift me his house
8 Mixed-use investment in Greystones town centre guiding €5.5m
9 IDA chief says State could soon ‘be fighting for a smaller pool’ of foreign investment
10 Takeda overhauls Shire’s Irish structure to ease dividend payments
Real news has value SUBSCRIBE