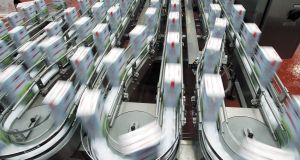 Lakeland Dairies said it concluded 2018 with a strong balance sheet and shareholders’ funds of €130 million.

The State’s second-largest dairy processor Lakeland Dairies has reported record revenue and profit for 2018 while cautioning that market conditions this year would be contingent “on the still uncertain impacts of Brexit”.

The cross-Border business, which is in the process of taking over rival processor LacPatrick, said it would meet “any potential headwinds” by continuing to ensure efficiency and flexibility across its operations.

Milk processing is the eye of the current Brexit storm as much of the supply moves back and forth across the Border.

He said the group was able to capitalise on “significant” economies of scale underpinned by investment in technology and automation.

The co-op said it concluded the year with a strong balance sheet and shareholders’ funds of €130 million, an increase of €12.4 million for the year.

The merger of Lakeland Dairies and LacPatrick Dairies has recently been given the green light by regulatory authorities in the Republic and the UK.

The new group – to be called Lakeland Dairies Co-Operative Society Limited – will have a cross-Border milk pool of 1.8 billion litres, produced by 3,200 farms across a catchment area including 16 counties. It will also have a combined annual turnover in excess of €1 billion.

“This will continue to be our commitment in the months and years ahead. Let us all re-energise behind the now-enlarged enterprise of Lakeland Dairies where, based on the collective achievements of co-operation, we will look forward with confidence to the future,” he added.