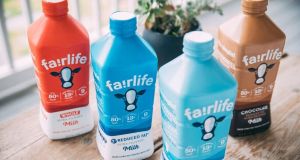 Coca-Cola has launched its own brand of milk, Fairlife, in the US

Drinks giant Coca-Cola has described as “speculative” a report that it is considering setting up a dairy processing plant in Co Cork.

According to a report in The Irish Farmers Journal, the US company has held a number of meetings with dairy industry officials here to scope out the possibility of establishing its own operation.

Coca-Cola has been diversifying away from sugary drinks in a bid to tap into a growing consumer preference for healthier beverages.

In the US, where milk sales have fallen significantly in the past decade and where more than half of adults do not drink milk at all, Coca-Cola has launched its own brand of milk, Fairlife.

The joint venture with US dairy farmers uses a special filtering process which allows sugar content to be reduced significantly or various nutrient contents to be enhanced. It sells it as a premium product for twice the price of normal milk.

The company recently spent €75 million on a new production plant for Fairlife milk in Ontario, Canada. There is speculation it might use an Irish plant to bring its Fairlife product to Europe, buying milk directly from Irish farmers.

In its report, the Irish Farmers Journal said Coca-Cola officials had visited food agency Teagasc’s research centre in Moorepark in Cork and the dairy processing technology centre at the University of Limerick.

“Today’s media reports regarding future investments in Ireland are purely speculative,” the company said in a statement.

“As a long-standing and significant investor in Ireland, Coca-Cola has regular discussions with State agencies and partners to discuss different areas of our business, including our ongoing evolution to become a total beverage company.”

Commenting on the report, John Finn of the Irish Farmers’ Association said any development that could add value to fresh milk and grow the market has to be welcomed.

However, he said: “Farmers would have to think long and hard about making a direct supply commitment to a private milk purchaser in which, unlike their co-ops, they have neither a stake nor any control.”

The president of Irish Creamery Milk Suppliers Association, Pat McCormack, said that he thought that dairy farmers would be well disposed to the idea of Coca-Cola becoming involved in the sector.

He said that traditionally Irish milk suppliers worked through the medium of co-ops, and that was still considered the idea model, but he noted that anything that increased competition for farmers’ milk supplies and gave the farmers another option had to be welcomed.