Eggs in a bottle – liquid gold for free-range producer 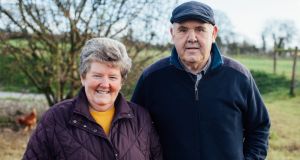 Margaret and Leo Farrelly, started their free-range egg business in 1988

Free-range egg producer, Clonarn Clover, is a family affair. Margaret and Leo Farrelly and three of their four children work in the business, which began life with 150 hens in 1988. Today, the company, based on the Cavan-Meath border, handles eggs from 200,000 hens. Some come from the family’s own farm (roughly 9,000 birds), the rest from satellite producers.

Being creative with egg production isn’t exactly easy. However, the company has made the most of what this convenience food has to offer. Clonarn Clover was the first producer to trial Omega 3-enriched eggs in the early 2000s; the first to introduce green egg-boxes; and the first to come up with a white-egg only pack in 2009 in response to consumer (and particularly ethnic demand) for white-shelled eggs.

Margaret Farrelly seems almost surprised when the word “innovative” is applied to her business.

“I don’t think we ever saw ourselves as being particularly innovative, but we’ve always been thoughtful and very passionate about our product,” she says. “We have been committed to free-range production from the very beginning and that has brought its own commercial challenges. What can you do but respond to them.”

To differentiate its new products from its traditional boxed eggs, Clonarn launched the separate O’Egg brand in 2011. This worked well to give them a more visible presence during the recession, but it is now being phased out as a major rebranding gets underway.

In January the company began the process of introducing its new Margaret’s premium label to the market.

“We did some market research and what came across very clearly was the need to differentiate ourselves,” Farrelly says. “Consumers like products with personality and a story – and we have a good one. But eggs are not generally marketed like that. Ask consumers for the name of an egg brand and they’re likely to name the supermarket it came from.

“We’ve been very active on social media for a long time, so people know us and we believe we can use this to make a bigger impact with the Margaret’s name.”

The company’s first experience of the recession was when its margins were hit.

“Our customers were looking for savings and that had an impact on us,” Farrelly says. “Our sales didn’t drop that much overall because those committed to free-range eggs tended to keep buying, but we felt it in the margin. It was really the budget egg producers who were worst hit and that’s not a segment, deliberately, we’ve ever been in.

“The recession was difficult though, not least because our customers consolidated suppliers and, while this was good for us as we picked up business, we had colleagues and indeed close friends who lost out and that was hard to watch.”

“It is quite difficult to come up with new ideas in this business and when you do it can take a long time to bring them to fruition,” Farrelly says. “The liquid egg product took about nine years of thinking and planning to get into production.

“What got us there eventually was being accepted on to the cross-Border Fusion programme that links companies in the South to academic bodies in Northern Ireland. We were partnered with the University of Ulster Coleraine and they worked with us on developing the egg in a bottle.”

The company launched the liquid egg in whole and white-only versions. The whole egg version was aimed at the hospitality, food service, manufacturing and bakery sectors while the whites were aimed at home and commercial bakers and health conscious consumers.

“Having come up with the product, we had to build a breaking and pasteurising plant at a cost of around €1 million,” Farrelly says. “We financed the research and development out of cash flow but there was also the cost of premises and equipment. Enterprise Ireland helped, but the lion’s share was self-financed.”

The Farrellys continued to push hard for new business and in 2012 were rewarded with a contract from Avoca.

“That was a big moment for us as Avoca was growing and we were asked to supply both liquid and shelled eggs,” Farrelly says. “Supplying eggs will always be the core of our business but, because we’re not big volume, we are subject to pressure on margins and need to both grow and have other strings to our bow.

“Had we just stayed as we were I don’t think our business model would have held up well through the recession.”

The Farrellys have been approached numerous times to become part of bigger groups. This would undoubtedly make life easier, but it would also have involved being associated with caged egg production and that is not something the family is prepared to consider.

“Our ethos is as a free-range producer and our independence is very important to us. We don’t want to be a small cog in a big wheel,” Farrelly says.

Margaret and Leo are now in their 60s but have no intention of retiring. They have recently purchased an old mill where they plan to consolidate production from their current two sites.

“We are going to call it the Egg Innovation Centre of Ireland and getting it up and running is a key part of our five-year business plan,” Margaret says.