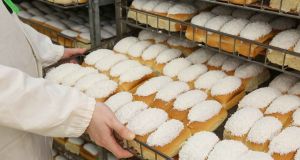 Genesis Crafty currently employs more than 350 staff at its bakery in Magherafelt.

New orders for Christmas products and fresh demand for year round favourites like pancakes and scones has delivered a jobs and investment boost worth more than £750,000 (€830,000) for a Co Derry bakery that last year was in administration.

Following a major reversal of fortunes over the last 12 months the Magherafelt company, Genesis Crafty, now plans to create 35 jobs on the back of its new investment project.

This time last year the bakery, which had previously been owned by the same family for 50 years, was forced to appoint administrators after it experienced “trading difficulties”.

Paul Allen, who was previously chief executive of Northern Ireland snack group Tayto, acquired the bakery last August as part of an administration deal that helped, at the time, to save more than 250 jobs in Co Derry.

The bakery produces the Genesis Crafty range, which is sold in Northern Ireland and the Republic, and also a wide range of goods including private label cakes and breads for stores including Marks and Spencer and Waitrose.

The company currently employs more than 350 staff at its bakery in Magherafelt.

Mr Allen said that Genesis Crafty had made “significant progress” in the last few months and he is now planning to expand the business.

“We have consolidated our operations, refined our distribution and sought to build upon the strong relationships that we have with premium retailers across the UK and Ireland,” he said.

Mr Allen said demand for its Genesis range particularly “pancakes, scones, cakes and bread” continues to grow and it has won a number of new contracts for both these and its speciality Christmas products with “some of the UK’s most discerning retailers”.

“This is an exciting era for the company and it is great to be looking for new staff to share in our journey,” he said.

1 Ireland faces 'deep downturn' this year and may not rebound until 2024 if there is a second wave
2 ‘The rental situation stops me moving back home’
3 Why are markets booming when a crash is on the way?
4 John FitzGerald: Civil Service expertise key to Government policy
5 Dublin consultancy Pathfinder set for expansion after buyout by Sia Partners
6 How much do Irish people earn? And what will Covid-19 do to our wages?
7 Red tape logjam creates fear for Irish timber supply
8 Ryanair pilots accept 20% pay cut, airline says
9 Major works at Rosslare Europort after €30m investment from Irish Rail
10 Preliminary deal to allow Irish goods travel through UK reached - reports
Real news has value SUBSCRIBE