Seeking a pizza the action: Domino’s dials up Ireland 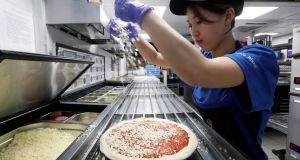 At entry level, the industry is not always the highest paid, compared with other sectors. This has inevitably led to a reliance in the foodservice industry on immigrant communities to boost the workforce. Photograph: Sergei Karpukhin/Reuters 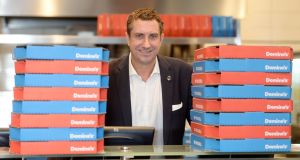 Do you like your base thin and crispy, or thick and soft? Do you prefer it with vegetable toppings, or heaving beneath a carnivorous extravaganza? Would a slice of pineapple drive you crazy, or do you enjoy tormenting the purists? And for one of the most divisive questions of our age: do you like it enough to eat it cold, the next day?

In the consumer world, there has never been a greater emphasis on food provenance and healthy eating. It’s not just a fad, it’s a structural shift in the market. How else can anybody explain the disturbing march of quinoa and aquafaba? Mass masochism, perhaps.

Yet in the face of this onslaught of performative and prissy dining, the humble pizza still thrives in all of its simple, delicious, oh-so-naughty and fattening, still so delicious, damn-you-I’ll-have-another-slice glory.

The proof is right there in the sales figures of the biggest operator. Domino’s, the world’s most recognisable pizza brand, grew sales in Ireland by 13 per cent in the most recent quarter, well ahead of Britain. Online sales here were up 31 per cent, and now represent almost six in 10 of all orders. Almost half of those used its app.

Domino’s Pizza has decided to target Ireland, which operates under a stock market-listed master franchise that also includes the UK, for even more growth. It is concocting a plan to increase the number of outlets here from 48 to about 75 and two weeks ago it hired, for the first time, a country manager to drive its plan.

For the company’s shareholders, it isn’t a bad way to celebrate the brand’s 25th anniversary in the Irish market. As for its customers, Domino’s has decided to commemorate the milestone with a special Hamrock pizza.

“Sometimes in this industry you can just get carried away with opening new stores,” said Simon Wallis, chief operating officer for the company that owns the UK/Ireland franchise. “We’re still focused on achieving growth through our existing estate. But we think we should be at about 75 in this market and we’re going to work with our existing franchisees to see where those should be.”

Domino’s has grown in Ireland in recent times without expanding its footprint. It recently opened a new store in Citywest, but that was its first new outlet in Ireland for six years.

Recent growth appears to have been driven largely by a greater propensity for people to stay home and order in using their mobile phones, which chimes with the proven trend in recent years for people to drink at home instead of going out to the pub.

Ironically, Wallis says, the emergence of web-based restaurant home delivery rivals such as Deliveroo and JustEat has also benefited Domino’s.

“They have grown the overall category for ordering in, and we’re well placed to meet the extra demand,” he said, sipping a coffee (it was far too early for pizza) at the new Citywest store on Thursday.

Ireland’s hospitality and food service sectors in general are facing a staffing crisis, just as they did around the turn of the millennium and heading into the last big economic boom. The fast food and home delivery segments have the extra pressure of competing for motorbike riders.

“When Deliveroo and JustEat came to Ireland in recent years, we saw an immediate pinch point on delivery drivers.”

If Domino’s wants to grow, it needs to attract more staff. The company has decided to publish much of its internal Rising Stars leadership and human resources programme online, for all to see. All of its workbooks, manuals and training videos are now available on Domino’s corporate website under the heading of Teamskills.

“We left out all of the competitively sensitive bits of Rising Stars, and published the rest,” said Wallis.

Wallis says that 80 per cent of Domino’s staff at managerial level started out in the business as customer service staff or delivery drivers.

“The business is also scattered, with stories of franchisees who started out as drivers, then became shift managers, restaurant managers, area managers and eventually owned their own businesses with us,” he said.

While there may well be opportunities for advancement at companies such as Domino’s, there is also some truth in the stereotype that the overall industry is hard work. And, at entry level, it is not always the highest paid, compared with other sectors.

This has inevitably led to a reliance in the food service industry on immigrant communities to boost the workforce. Brexit appears likely to crimp this flow of immigrant workers into the UK, which could yet have an impact on Domino’s growth plans there.

That could yet amplify the importance to Domino’s of its Irish growth plan.

Although Domino’s has 48 Irish outlets, these are operated by just eight frachisees. The company is not currently looking for new franchisees, planning instead, initially at least, to expand its footprint by encouraging existing operators to open more stores. It seems inevitable, however, that it will have to widen the gene pool at some stage.

Wallis will not be drawn on a timeline for the target to boost its network here by more than half to 75. If it transpires, it would boost staff numbers by about 1,000, with each new store creating about 35 new roles.

“We will open perhaps between three and five new stores next year with our existing franchisees, and take it from there,” said Wallis.

The Domino’s online app restricts customers to ordering for home delivery from a single (presumably the nearest) store. Stores mark out their turf by address count. The average number of addresses for each outlet is almost 22,500, the company says.

When a store’s address count goes way up, it opens up the possibility that its area could be split with a new store – the new Citywest outlet arose from a split away from a nearby Tallaght Domino’s.

“It is always an open question as to whether we need to bring new franchisees into the business,” said Wallis. He confirmed that Dublin would be the obvious focus of its Irish growth plan, followed by Cork, and then Limerick and Galway.

The central UK/Ireland Domino’s group also operates a dough-making facility in Naas. It supplies all of the Irish franchisees, including a further 26 outlets in the North, with their pizza bases.

Wallis says the group is considering a redevelopment of its Naas facility, which pumped out nine million dough balls last year and employs 40 staff.

“It’s getting pretty full. We are reviewing the options around that site. It could be a redevelopment or we’re also looking at acquisition of other sites in or around the Naas area.”

Irish franchisees, he joked, are “precious” about the quality of their dough balls.

“An redevelopment of Naas will definitely take our franchisees on a journey with us to protect that quality.”

Regardless of Domino’s aspirations for growth and the apparent resilience of its products in the face of a shift towards healthier eating, it would be churlish to suggest that it will remain immune to these wider market trends forever. Pizza is not good for you, no matter what way it is dressed up. Domino’s must navigate these currents and eddies in its marketing. It recently launched a new campaign, billing pizza as “the official food of everything”.

“We have three mantras. We give people choice, so they can get low-fat mozzarella if they want it... we give them the right amount of information, such as calories counts on our menus... and we make progressive changes where we can, such as lower sugar and salt content,” said Wallis.

“But it still has to taste good, because you have to recognise that pizza is a treat. On average, people enjoy that treat once every five weeks.”

Meanwhile, there are reports coming in that some people out there, inexplicably, eat quinoa (which tastes like cardboard when you eat it straight after a slice of pizza) every day in their salad.

There is nowt as strange as folk.