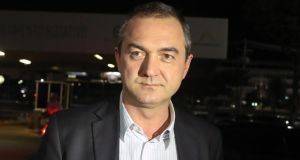 Brazil’s securities regulator has opened an investigation into the Cork-born head of investor relations at meat processing giant JBS, which has been engulfed by a corruption scandal in recent months.

The Brazilian authority, CVM, has accused Jeremiah O’Callaghan – known as Jerry and who has worked with JBS for two decades – of violating his duty to inform markets by not questioning JBS managers and controlling shareholders in relation to a plea bargain signed in May.

CVM also claims Mr O’Callaghan disclosed the deal in an inappropriate manner by not using a so-called material fact form, used to highlight important information from the company.

Mr O’Callaghan, who moved to Brazil in 1979, declined to comment when contacted by The Irish Times on Tuesday.

On May 17th, reports surfaced in Brazil that Wesley and Joesley Batista, the brothers who control JBS, admitted to a wide-ranging graft scheme and agreed to pay a substantial fine to avoid prison.

The news sent JBS shares plunging and created havoc in Brazil’s financial markets. JBS confirmed the deal late on May 18th in a regulatory filing signed by Mr O’Callaghan.

The scandal was followed by allegations that Joesley and Wesley Batista used inside information to trade stocks and currencies before their plea bargain was made public. Last month, they were both arrested and jailed.

JBS bought Northern Ireland based poultry group Moy Park two years ago for $1.5 billion (€1.3 billion). However, the Brazilian group was forced to put Moy Park back on the market in June to appease creditors and ratings firms after the value of its bonds tumbled in the wake of the news of the Batista’s plea bargain.

Last month, JBS sold Moy Park to US-based chicken company Pilgrim’s Pride, in which the Brazilian group has an almost 78.5 per cent stake, for $1 billion.

The deal effectively amounts to a transfer of funds from the US to Brazil, where JBS has agreed to pay its banks 80 per cent of the proceeds of any asset sales.

JBS named its 84-year-old founder, Jose Batista Sobrinho, as chief executive, replacing his son, Wesley, as the latter remains in jail. The move to appoint the family patriarch to the top job has prompted opposition from the company’s second-largest shareholder, Brazil’s national development bank BNDES.