Guinness marks 200 years of stout exports to US 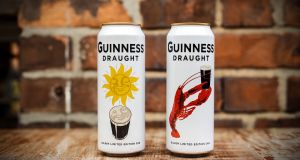 There will be plenty of glasses raised this week as Guinness marks 200 years since it first started shipping the black stuff to the US.

In another big anniversary, the company is also marking the 120th anniversary of the birth of John Gilroy, the artist behind the classic Guinness advertisements that ran from the 1930s to the 1960s. The ads played a significant role in helping to make the brand known globally.

A handwritten note discovered in a brewer’s log held at Guinness’s archives at St James’s Gate in Dublin, reveals that on October 16th, 1817, eight “hogsheads” of porter were delivered to a Mr John Heavy in South Carolina.

To mark the anniversary, brewers working at the company’s Open Gate Brewery in Dublin have dreamed up a 200th anniversary export stout for sale in the US. It is based on an original recipe from Benjamin Guinness, the son of founder Arthur Guinness.

Diageo is set to mark the next chapter in its history stateside with the opening of the first Guinness brewery in more than 60 years on US soil. The $50 million (€42 million) Open Gate Brewery and Barrel House, which will open next year, is located in Relay, Maryland.

Closer to home, Guinness is also marking the anniversary of the birth of John Gilroy with the launch of limited edition cans bearing two of his most famous ads.

The cans depict Mr Gilroy’s “smiling pint” image and his lobster illustration. The latter was conceived as Guinness was once considered to be the perfect pairing with the seafood.

Guinness was established in 1759 when Arthur Guinness signed a 9,000-year lease on St James’s Gate Brewery in Dublin. It is now brewed in 49 countries and sold in more than 150 countries with almost nine million glasses of the stout consumed each day.