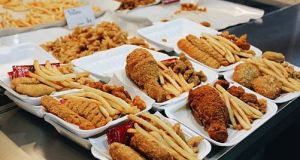 “Ireland is facing a health catastrophe. Six in 10 adults and one in four children are either obese or overweight.” Photograph: Getty Images

Over 20 leading business academics have appealed to Minister for Health Simon Harris to scrap a forthcoming voluntary code of conduct on the marketing of junk food to children.

They argue that strong regulation is needed instead as companies producing junk food will still seek to maximise profit under a voluntary code.

“Ireland is facing a health catastrophe. Six in 10 adults and one in four children are either obese or overweight,” 24 senior faculty members in the country’s top universities wrote in a letter to the Minister. “Marketing plays the most important role in perpetuating and accelerating this catastrophe.”

Mr Harris has voiced his concern about the marketing of junk food to children, and intends to introduce a voluntary code of practice to control it, both online and in retail settings, as part of a suite of measures aimed at addressing obesity.

However, the academics from Trinity College Dublin, DIT, NUI Maynooth, UCD, NUI Galway and DCU say a voluntary marketing code is insufficient to tackle the problem, believing it cannot override the profit instinct of private companies.

Marketing, they told the Minister, makes food high in salt, sugar and fat “ever more attractive and visible, convenient and cheap” to children.

“The response to a potential catastrophe cannot be a voluntary code. Voluntary codes rely on mutual agreement between stakeholders. But the ultimate goals of junk food brands [to increase sales] and government [to reduce unhealthy consumption] simply do not align.

“And there are no penalties for those who ignore voluntary codes because they are, by definition, not statutory.”

The signatories point to previous failures of self-regulation in several areas including banking, climate change and tobacco. “Obesity is no different. It’s time to step in, to make a positive intervention with binding statutory regulations.”

Expanding on the point, Dr Norah Campbell, assistant professor at Trinity Business School specialising in marketing, said there was a concern that those contributing to the problem were being asked to contribute to its solution.

“We get a situation where you are using Dracula to head up the blood bank,” she said, adding that a voluntary scenario could “never be policed”.

In response the Department of Health said its approach represented a “step in the right direction”, and was not an attempt to introduce self-regulation.

The department is due to launch the Code of Practice for Non-Broadcast Media Advertising and Marketing of Food and Non-Alcoholic Beverages, which includes sponsorship and retail product placement, in the coming weeks.

The code was developed by a working group which was chaired by Prof Alan Reilly, former chief executive of the Food Safety Authority of Ireland.

In a statement the department said it welcomed the strong interest expressed by the academic sector and acknowledged the concerns set out in the letter.

“What is intended is not self-regulation. This code will require monitoring, and many stakeholders will have a role and interest in monitoring how well the code achieves its objectives.”

The code has been developed by the Department of Health, the HSE, food companies and advertisers, with the objective of reducing exposure to the marketing of food and drink that is high in fat, sugar and salt.

Although voluntary, the code will be monitored by a designated body and a public register of companies that sign up will be kept. There will also be a complaints procedure.