Operating profit falls 13 per cent to €8.91 million while turnover drops 3 per cent 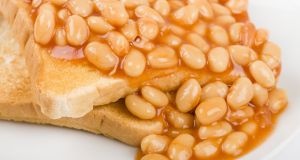 A slowing appetite for Heinz baked beans led to a 13 per cent dip in the company’s profits in 2016.

Recently filed accounts for HJ Heinz Company Ireland Limited show a fall in operating profit from €10.3 million to €8.9 million as the company’s baked beans brand performed “slightly behind the market”.

Turnover also fell at the ketchup, soup and bean seller, albeit by only 3 per cent to €53.8 million. A number of factors were said to contribute to the drop including the sale of the Aunt Bessies Frozen Potato subsidiary, and an accounting change to a 52-week reporting period compared with a 53-week fiscal year.

While relatively positive on the performance of some brands, citing “strong growth in tomato ketchup and canned soup”, the “highly competitive” business environment in Ireland was noted by the directors. The group recorded sales growth in some of its key categories but that was offset by declines in infant feeding, side meals, easy meals, and the frozen potato spin-off.

Profit after tax fell by almost 12.5 per cent to €7.8 million while the total income for the year dipped to €6.5 million from €10 million after a loss in respect of the company’s pension scheme.

In terms of future outlook, the directors said growth would be challenged by “consolidation of multiple and discounter share of trade and their associated own-label trading strategies, and aggressive branded competitor promotional activity”.

As would be expected, currency volatility and implications of Brexit are also “key considerations”.