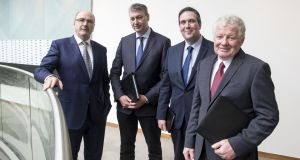 Co-operatives Lakeland Dairies and Lacpatrick formally merged on Monday creating a business with sales of more than €1 billion a-year.

Irish and UK regulators recently approved the Lakeland’s and Lacpatrick’s proposal to join forces, paving the way for a deal that was under negotiation since last year.

The pair announced on Monday that they had formally merged. The new business will be called Lakeland Dairies Co-operative Society Ltd.

Lakeland will be the second biggest dairy processor in Ireland, handling 1.8 billion litres of milk produced on 3,200 farms in 16 counties on either side of the border. It will turnover more than €1 billion a-year.

Lacpatrick began talks with Lakeland almost 12 months ago after announcing that it was seeking a strategic partner or merger.