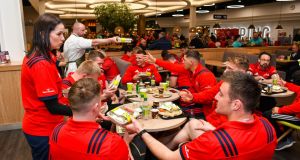 Zest! will produce all meals for Munster’s senior and academy squads during training and while travelling at no financial cost to the club.

The three-year deal involves a brand association between Munster Rugby and Zest! where Zest! will have access to Munster players to create content to further the brand association. The Zest! logo will not appear on Munster rugby players shirts as part of the deal.

Zest! will provide a catering service to Munster that will include specific dietary driven and individualised meals for all squad sessions at the high performance centre at the University of Limerick as well as food packs for travel.

The agreement was signed off on Friday at Shannon Airport as the players departed Shannon for Edinburgh ahead of Saturday’s match.

The deal is the result of a partnership between the two brands that started 18 months ago when Zest! began providing food once a week for Munster squad sessions at UL’s high performance centre.

In future the company will provide breakfast, lunch and snack meals for each Munster squad player. Zest! is headquartered in Shannon and also operates three cafes in Limerick and one in Ennis.

Former All-Black and head of commercial and marketing at Munster Rugby, Doug Howlett said: “This is an excellent partnership for us at Munster Rugby and a very significant commitment by Zest! We have built a really strong relationship over the past 18 months and have been very happy with all elements of their operations.

Co-owner of Zest! Ean Malone said: “Munster have been fantastic to work with from the off. They apply the same level of professionalism off the field as they do on it and aside from this being one of the greatest brands in Irish sport, this is the type of standard that we want to work with.”