Edmond Scanlon’s pay package compared to €5.3m for predecessor in 2017 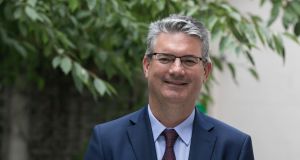 Kerry Group paid chief executive Edmond Scanlon almost €2.6 million for his first full year at the head of the food and ingredients business, according to its annual report.

Mr Scanlon’s pay was roughly half the €5.3 million that his predecessor Stan McCarthy took home in 2017, aided by more than €3.5 million in bonuses.

Mr Scanlon succeeded Mr McCarthy on October 1st, 2017, so 2018 was his first full calendar year leading the Irish group. His basic salary for last year was agreed when he first took the job.

The figures show that Mr McCarthy earned a total of €5.285 million from Kerry in 2017. A €2.07 million payment under a long-term incentive scheme, designed to encourage executives to stay, and a €1.48 million performance bonus, were the biggest elements of this.

Kerry shareholders agreed the long-term bonus plan in 2013. Under its terms, executives are paid shares worth up to a maximum of twice their basic pay in a given 12-month period.

The company awards the shares to the executives over three years once it meets certain performance targets.

Separate performance bonuses are tied specifically to sales and profit growth and how well these convert to actual cash.

Chief strategy officer, Brian Mehigan, earned €2.285 million last year, less than the €2.363 million that Kerry paid him in 2017, when he was head of finance.

Marguerite Larkin, whom Kerry appointed chief financial officer on September 30th 2018, earned a total of €352,000 in her first three months of that role. The group agreed to pay her a basic salary of €700,000.

The report states that Kerry gave Ms Larkin a once-off, taxable payment of €500,000 to compensate her for foregoing a profit share due from her previous job, senior partner with accountants Deloitte. She invested half of this in the group’s shares.

Gerry Behan, president and chief executive of Kerry’s taste and nutrition division, was its best-paid manager last year, taking home €2.64 million, almost 19 per cent less than the €3.23 million he received in 2017.

In his report, Mr Scanlon states that Kerry expects the UK will manage its departure from the EU rather than opt for a hard Brexit.

“The group has mitigation plans in place to limit the potential short-term implications of a no-deal scenario,” he says.