Food company discloses further $1.2 billion of write-downs as first-half profit falls by half 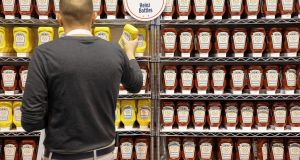 Kraft Heinz’s shares fell 13 per cent on Thursday morning, taking the decline for the year to 38 per cent. Photograph: Scott Morgan/Reuters

Kraft Heinz, the Warren Buffett-backed food company, has disclosed another $1.2 billion (€1.07 billion) of write-downs, on top of the $15 billion charge it took earlier this year to reflect how shoppers have been shunning its brands.

Its shares fell 13 per cent on Thursday morning, taking the decline for the year to 38 per cent. The company, whose products include Heinz ketchup, Kraft macaroni and cheese and HP Sauce, said on Thursday that first-half profits had halved from a year ago.

The Chicago-based group had promised to transform the food industry when it was created in 2015 by the combination of Kraft and Heinz in a deal engineered by the investment firm 3G Capital and Mr Buffett. But it has since become the poster child for struggling consumer goods companies. Products that had been household staples for generations have gone out of fashion.

On top of that, the company is also being investigated by the US Securities and Exchange Commission over its bookkeeping.

Kraft Heinz’s new chief executive Miguel Patricio, who is 40 days into the job, said on Thursday: “The level of decline versus previous year is nothing we are proud of.” – Copyright The Financial Times Limited 2019