Group reports turnover of £365 million for third quarter, down 2.9 per cent on last year 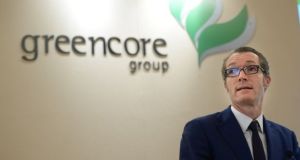 Listed food group Greencore has reported a 2.9 per cent decline in revenue for its third quarter. Year-to-date sales are down 4 per cent.

The company, which is listed in London, recorded turnover of £365 million for the quarter. It attributed the fall in revenue to the impact of site disposals and exits from several businesses, namely Hull, Evercreech and Kiveton. On a pro-forma basis, the company said revenues were up 0.8 per cent compared with the same quarter a year earlier.

Shares in the company closed 3.6 per cent weaker in London, having recovered some ground in afternoon trade. They had been 4.4 per cent off at midday.

In the group’s “food to go” categories, sales rose 0.6 per cent to £250.6 million in the third quarter, reflecting weak market conditions and unseasonal weather. Year-to-date revenue in the categories totalled £697.8 million, up 4.6 per cent on both a pro-forma and reported basis.

“The group is performing well against its strategic and financial objectives, despite the soft underlying revenue growth in the third quarter,” Greencore said.

“The final quarter represents a seasonally important period for Greencore and the group continues to anticipate growth in adjusted operating profit for the full year supported by underlying revenue growth and a good operational performance,” it added.

The company said it anticipated that its full-year net debt-to-ebitda (earnings before interest, taxes, depreciation and amortisation) ratio, would be at the lower end of its medium-term target range of between 1.5x to 2.0x.

In a note to investors, Goodbody said the company had put in a “resilient performance” during the quarter. It maintained its positive stance on the stock.

Davy stuck by its neutral outlook and said it expected to moderately reduce its full-year ebidta forecast by between 1 and 2 per cent to £108.5 million.

Greencore is scheduled to report its full-year results in late November.