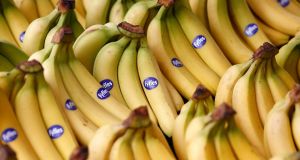 The consideration for acquisitions in western Canadian, comprising the Prairie Mushroom group of companies and 4 Season King Mushrooms, was contained in the 2018 annual report of Fyffes, recently filed with the Companies Registration Office.

Fyffes, best known for its banana, melon and pineapple distribution operations, ventured into the North American mushroom business in April 2016 through its acquisition of Canadian producer Highline Produce in a deal that was worth the equivalent of €97.7 million at the time. It followed up months later with the €40 million purchase of another Canadian firm, All Seasons Mushroom.

Fyffes itself was taken over by Japanese conglomerate Sumitomo in early 2017 in a €761 million deal, ending its 35 years on the Irish stock market.

Fyffes latest report shows that its operating profit fell to €8.75 million last year from an underlying figure of €23.6 million for the previous year, which it attributed to “difficult trading conditions”.

The company’s administrative expenses rose to €65.8 million from €50.4 million, while total revenues edged 1.5 per cent higher to €1.46 billion.

Total debt increased by almost €100 million to €274.4 million, driven as it received a €176.9 million subordinated loan from Sumitomo. Its bank borrowing declined by about 35 per cent last year to €119.7 million.

The Irish Times reported in June that Sumitomo had subsequently moved to swap its loan to Fyffes for €183 million of additional equity in the Irish company.

Fyffes’ chairman David McCann, who has remained in the role since the takeover, is the grandson of Charles McCann, who laid the foundations for the group when he opened a fruit and vegetable shop in Dundalk in 1902.