Guinness maker says that operation profit rose to €4.48bn for year to June 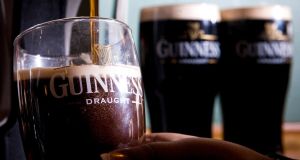 Diageo has been restructuring in recent years to improve performance and streamline its portfolio by selling non-core businesses and underperforming labels, while bulking up on newer, hipper brands. Photograph: Chris Ratcliffe/Bloomberg

Guinness-maker Diageo reported higher annual profit on Thursday, helped by growth across all its markets, an improved price mix and cost controls.

Diageo has been restructuring in recent years to improve performance and streamline its portfolio by selling non-core businesses and underperforming labels, while trying to bulk up on newer, hipper brands. It has looked to focus on its Scotch business and grow its operations in India and the United States.

Organic net sales rose 6.1 per cent with Asia Pacific rising 9 per cent in net sales from strong demand in China and India. Net sales in North America rose 5 per cent, while Europe and Turkey reported a 4 per cent rise.

“In the medium term I expect Diageo to maintain organic net sales growth in the mid-single digit range and to grow organic operating profit ahead of net sales in the range of 5 per cent to 7 per cent.” chief executive Ivan Menezes said.

Alcohol per capita consumption in India more than doubled over eleven years to 2016 and nearly doubled for China, according to a World Health Organisation (WHO) report last year.

Diageo also launched a new brand of gin called Villa Ascent earlier this year to capitalise on the growing gin craze among Britons dubbed the “ginaissance”. More than 66 million bottles of gin were sold in Britain last year, up 41 per cent, according to the Wine and Spirit Trade Association.

However, Diageo, which makes an array of scotch whisky drinks, faces pressure from president Donald Trump’s use of tariffs as a weapon in trade conflicts because Scotland’s most famous export could get caught up in one. – Reuters