Sales of low and non-alcoholic beer surge in the Republic 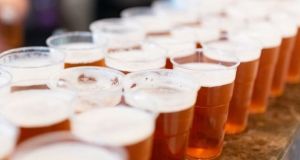 Beer remains the most popular alcoholic drink in the Republic

Sales of low and non-alcoholic beer jumped by 60 per cent in the Republic last year and most consumers are keen to see more of these products on sale locally.

That is according to the Irish Brewers Association (IBA) which forecasts that more independent and craft producers are likely to follow in the footsteps of drinks giants such as Diageo and Heineken in introducing low and non-alcoholic beers.

According to a survey conducted by the IBA, as many as 57 per cent of Irish consumers want greater availability of non-alcoholic products.

The move comes as official figures highlight a significant drop in alcohol consumption generally since the turn of the century.

Beer remains the most popular alcoholic drink in the Republic, accounting for just under 45 per cent market share of all booze consumed in 2017. In addition, beer production rose to just over 8 million that year as against 7.68 million hectolitres in 2016.

Jonathan McDade, head of the IBA, said health-conscious consumers are increasingly choosing quality over quantity when it comes to alcohol.

“The key thing for brewers is maintaining the excellent taste that consumers are used to with quality beer products on the market,” he said.