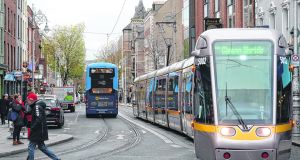 A company backed by restaurateur Shane Mitchell and Jobbio entrepreneur John Quinn is looking to open a new restaurant on Dublin’s Dawson Street as part of a wider renovation of formerly dilapidated buildings.

Beechlawn Investments Europe Ltd has applied to Dublin City Council to change number 20 Dawson Street, previously an office for property agent Savills, to a licensed restaurant. Success of the application would add to Mr Mitchell’s existing restaurant interests of Asador in Ballsbridge and Prado in Clontarf.

The application for the Dawson street project comes against a challenging backdrop for restaurants in the city centre. The popular restaurant Amuse, located nearby on the same street, ceased trading on December 24th.

Alongside Mr Quinn and Mr Mitchell, who between them control more than 38 per cent of Beechlawn, the company is linked to developer Shane Whelan whose Westridge Real Estate business separately completed its purchase of DIT’s former Kevin Street campus for €140 million in September last year.

Beechlawn’s application submitted earlier this week relates solely to number 20 Dawson Street, located adjacent to the two-Michelin-star restaurant, The Greenhouse. But it forms part of a wider plan, the first part of which has been approved.

The company proposes to change the basement and ground floor of number 20 from an office to a restaurant including an ancillary public bar. As part of the plan, it would demolish an existing two-storey extension to replace it with a single-storey extension which will have a covered outdoor bar area at ground level and a roof terrace. That will be accessed through a mews extension on buildings at the rear of 14-15 St Stephen’s Green and number 20 Dawson Street which were sold to Anville Properties for €620,000 in 2015.

Those buildings to the rear were originally built between 1778 and 1779, comprise stables and a coach house and retain a number of period features. They were put on the market in 2014 by Dublin City Council which said it had no use for them. In August 2018, Anville received permission to rejuvenate the coach house and mews buildings which had fallen into a state of disrepair.

It is understood that the parties involved in the development have been working on the project for more than 2½ years and have committed substantial capital to bringing the buildings back to life. The intention is ultimately to connect the entire development and it is understood that the success of the application lodged this week is seen by the developers as being crucial to making the site a viable trading operation.

Including the extension, the proposed restaurant and bar would have a floor area of 178sq m.

1 Pilita Clark: Managing ‘meeting monsters’ to get work done
2 Chris Johns: Economies may enjoy ‘roaring twenties’
3 Covid-19 weighs on law firms as two in three see revenue drop
4 Arcadia on the brink of becoming biggest retail casualty of pandemic
5 Hospitality sector may take four years to recover - Supermac’s
6 Basic income for all: Has the Covid crisis given us a new economic model?
7 ‘They’re not making any more land, so it will be valuable’
8 Irish early-stage start-ups suffering funding crisis
9 Unilever’s Dutch and British arms merge after 90 years ahead of Brexit
10 Profits jump threefold at LinkedIn’s Irish unit to $294.2m
Real news has value SUBSCRIBE