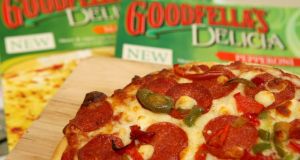 Birds Eye owner Nomad Foods plans to cut itself a big slice of the Irish and British pizza markets with the €225 million purchase of Goodfellas.

Nomad said on Wednesday that it had agreed to buy Goodfellas frozen pizza, based in Naas, Co Kildare, and the smaller British brand San Marco from Green Isle, the Irish food processor owned by UK group Boparan Holdings.

Wayne Hudson, Birds Eye’s managing director for Ireland and the UK, pledged that all 430 Goodfellas workers would move to the business’s new owner once the deal has gone through.

He added that Nomad did not plan to move Goodfellas production from the company’s two bases in Naas and Co Longford. “We have got no plans to make any changes,” Mr Hudson said.

“Pizza is the second-largest frozen category in Europe. It’s a natural extension to our footprint and a huge opportunity.”

Goodfellas is the number one Irish brand, with about half the €65 million a year market here, while it holds the number two position in the UK, where it has a 17 per cent share of a business worth €490 million annually. This indicates that UK sales are close to €85 million a year.

Nomad predicted that the Goodfellas deal would add €150 million a year to revenues and up to €25 million to earnings within 24 months of the sale closing. Mr Hudson noted that it would double the size of Birds Eye’s Irish business.

Stefan Descheemaeker, chief executive of Nomad Foods, said the Goodfellas deal followed a “banner” 2017 for the company, during which investments in existing operations translated into growing sales. “We ended the year on a high note,” he said.

New York-listed Nomad expects 2017 earnings before tax and write-offs – a measure of the cash a company generates – to be around €328 million. The group owns the Birds Eye, Findus and Iglo frozen food manufacturers.

It has nine factories in Europe, including one in Britain. Goodfellas is its first venture into both the Republic and frozen pizzas.

Boparan Holdings, led by businessman Ranjit Singh, owns 2 Sisters, which in turn owns Green Isle. The Birmingham-based group acquired the Irish producer when it bought Northern Foods for £340 million in 2011.

After the Goodfellas sale goes through, at some point in the first quarter of 2018, Green Isle will be left with two factories, in Gurteen, Co Roscommon, and Portumna, Co Galway, and about 300 workers.

Its other brands include Green Isle frozen vegetables, Donegal Catch frozen fish and the Galway Pie and Pastry Co. Mr Singh indicated that 2 Sisters had rebuffed other offers over the past few years for Goodfellas.

“The net proceeds from the sale are intended to be used to repay debt and to invest in the group’s core businesses,” he said.

“The Green Isle and Donegal Catch brands, and our frozen pastry business, remain within our business.”

There is speculation that he is also lining up a tie-in of his group’s Fox’s Biscuits and Wagon Wheels-owner Burton’s Foods.

Mr Singh has struck a string of deals over the past two years. In 2016 he snapped up turkey meat producer Bernard Matthews from private equity group Rutland Partners.