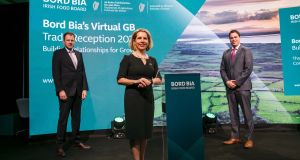 Bord Bia chief executive Tara McCarthy warned the extra costs and complexities of trade with the UK post-Brexit are likely to cause significant challenges.

Some €13 billion worth of food, drink and horticulture products were exported from the Republic last year, despite the pandemic causing widespread disruption in various markets. This was only 2 per cent down the previous year.

The headline figure contained in Bord Bia’s latest export performance and prospects report was described as “remarkable” in the context of such an “unprecedented” challenge.

The agency said it underlined “the dividend of a decade-long diversification strategy” that has seen Ireland widen its export base.

However, chief executive Tara McCarthy warned the extra costs and complexities of trade with the UK post-Brexit are likely to cause significant challenges in the coming year.

Confusion over new customs and border procedures has already led to major backlogs in certain sectors.

The agency’s latest annual report shows that, while pandemic-related disruption led to declines in beef, seafood and alcohol exports last year, this was offset by increases in exports of pig meat and sheep and a further hike in the value of dairy exports, particularly to Asia.

Alcohol exports were the hardest hit, declining by 19 per cent to €1.3 billion with whiskey exports down by more than €200 million.

The value of Irish seafood exports also fell by 10 per cent to €443 million, primarily down to a disruption of exports in the shellfish category.

Beef exports, the largest single component of Ireland’s food export trade, fell by 2 per cent to €1.9 billion as a result of what the agency said was a disruption in core markets “alongside continued challenges in access to mainland China”.

In the UK, which represents 44 per cent of primary Irish beef exports, Bord Bia said extensive retail channel demand had partially “counteracted” the significant decline in foodservice caused by restrictions to curb the virus.

Dairy exports, the largest category, rose by 3 per cent to €5.2 billion despite a decline in commodity prices.

Bord Bia said dairy is now the most geographically diversified category of all the major Irish food and drink exports with almost half exported to markets outside the UK or the EU 27.

The report shows that the majority of growth in food exports since 2016 (€1.9 billion) comes from the EU 27 (46 per cent) and international markets (43 per cent) with the UK accounting for just 10 per cent of growth, the report said.

Nonetheless, the value of Irish food and drink exports to the UK has grown by €1.9 billion or 16 per cent since the UK voted to leave the European Union in 2016.

Meanwhile, lobbyists for the multinational alcoholic drinks manufacturing sector in Ireland have called on the Government to redraw its Level 5 restrictions and to come up with a revised plan “for really living with Covid”.

Drinks Ireland, a division of employers group Ibec, issued its outlook for 2021, following publication earlier of the Bord Bia report on exports. The lobbyists said it was “vital” for the drinks industry that the entire hospitality sector is eventually reopened, as restrictions on outlets hurt drink sales.

Drinks Ireland also called for the State to fund more marketing staff based abroad for the Irish food and drinks exporting sector. It warned that drinks manufacturers’ visitor centres are 90 per cent dependent upon international tourism, which is effectively blocked due to quarantine restrictions.

The group said alcohol brand visitor centres, which in Dublin would include attractions such as the Guinness Storehouse, would have to focus on the domestic market for the time being, although even that segment will be challenged until current restrictions are significantly relaxed.

Drinks Ireland said such attractions would pivot their offerings in the short term to more premium experiences for smaller, domestic groups, rather than targeting the large-scale groups of foreign tourists that traditionally drive their revenues.