All 1,748 pubs, bars and restaurants have been closed since December 30th 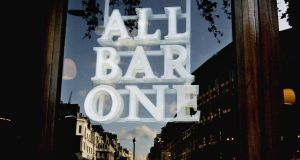 Irish-backed UK pub giant Mitchells & Butlers said on Thursday it was considering an equity raise after England was plunged into a third national lockdown to try to contain spiralling coronavirus cases.

The Birmingham-based company, in which Irish horse-racing magnates JP McManus and John Magnier hold a combined 23.5 per cent stake, said it had £125 million (€138.5 million) of cash balances, but that it was burning through as much as £40 million a month even after reducing spending and operating costs. In addition, it faces a £50 million debt service payment per quarter.

Mr McManus and Mr Magnier, investors in the pub group since 2007 through an investment vehicle called Elpida, would need to subscribe for new shares in an equity raise to maintain their combined stake. Elpida’s two board representatives, Keith Browne and Eddie Irwin, were part of a unanimous decision by directors to explore a share sale.

Since the UK government announcement reallocating Covid-19 restriction tiers around England on December 30th, none of the outlets have been open across its estate of 1,748 pubs, bars and restaurants under brand names including All Bar One, O’Neill’s and Ember Inns.

Total sales for the 14 weeks to January 2nd were 67 per cent below the prior year, with trading when pubs were open during the period down 30 per cent on a like-for-like basis, it said. The pub operator has already cut 1,300 roles, suspended dividends and sought debt waivers to ride out the crisis.

“We welcome recent positive news on vaccine approval and roll-out but the future facing the hospitality sector remains extremely uncertain. It is not possible to estimate with any confidence what restrictions on our ability to trade lie ahead of us and for how long. As a result, the directors believe it is prudent to explore an equity capital raise, to give the group increased financial and operational flexibility,” the company said.

No decision had yet been made with regards to the timing, size or terms of any such equity capital raise, it said.

“We had flagged that liquidity was tight, so the equity raise does not come as any major surprise given the latest national lockdown, which could persist for two months or more,” said Paul Ruddy, an analyst with Goodbody Stockbrokers. “Although this will create dilution, lower net debt exiting the crisis and improved liquidity will be a net positive for the equity story through the recovery phase.

“With little structural impediment to eating out in a post-vaccine world, and demand concerns somewhat offset by a supply reduction, there is little reason it should not return to prior peak sales and margin in time.”

Shares in Mitchells & Butlers were down 8.4 per cent in early London trade but had reduced losses to 3.2 per cent by late afternoon.