Tullamore-based ham producer has been acquired by UK company 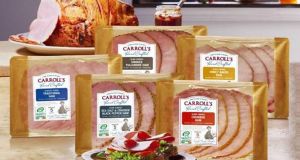 A selection of Carroll’s ham products.

The business was sold by Carlyle Cardinal Ireland (CCI) for an undisclosed sum. CCI had acquired the company in 2015 for €37.3 million and is believed to have made a return on its investment.

Carroll’s produces a range of cooked meats and convenience food, and employs 325 people at its site in Co Offaly. Its turnover has increased by 50 per cent over the past five years, driven by investment in manufacturing capacity, innovation and new product development.

The company is to be integrated into Eight Fifty’s pork division and will expand its presence in the Republic following the acquisition of M&M Walshe in June 2020.

The transaction is subject to approval from the Competition and Consumer Protection Commission, and is expected to close in the first quarter of next year.

Upon completion, Yorkshire-based Eight Fifty said it would have sales of about £1.9 billion (€2 billion) and employ 8,300 people across 23 manufacturing sites in the UK, Ireland, Germany and France.

Di Walker, chief executive of Eight Fifty Food Group, said Carroll’s would be a “great addition to our business”.

Jason Rodrigues, a partner with CapVest, said: “Carroll’s is another great European addition to our growing portfolio ... we look forward to leveraging the Eight Fifty platform to further develop the business going forward”.

Kieran Carolan, chief executive of Carroll’s Cuisine said: “Our company has gone from strength to strength in the past five years. It has been an exciting journey and we have achieved our ambitious growth targets with the fantastic support of Carlyle Cardinal Ireland. We look forward to continuing to grow our company as part of Eight Fifty Food Group.”

John Dolan, managing director of Cardinal Capital Group said: “We are very proud to have facilitated the rapid growth of Carroll’s Cuisine, which over the past five years has not only consolidated its position as one of Ireland’s top food brands but has also more than doubled employee numbers. ”

Jonathan Cosgrave, partner at Melior Equity Partners, which advises the CCI fund on behalf of The Carlyle Group, said: “During our partnership with Carroll’s management, more than that €5 million has been invested to support manufacturing capacity expansion, new product development, and environmental and sustainability programmes. This investment enabled the brand to expand its presence in existing and new markets, increasing both sales and employment.”