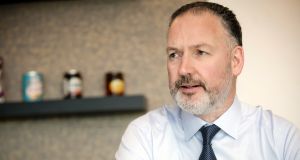 Valeo Foods, the Dublin-headquartered food group that owns Jacobs biscuits, has gained a foothold in the German market by acquiring Schluckwerder, a confectionery manufacturer famous for its Lübeck marzipan sweets.

It did not disclose the value of the transaction, but said it would bring the annual sales of its European division to €282 million. Accounts for the 12 months to the end of March 2020 put revenues in this division at €122 million. Valeo said its annualised group revenues, which were about €1.02 billion in its last accounts, would rise to €1.2 billion.

About a quarter of Schluckwerder’s revenues come from exports outside the German market. The company’s products are tailored towards Christmas and Easter, with marzipan and nougat eggs and breads, pralines and fondant.

It is Valeo’s 18th acquisition since it was set up just over a decade ago by Capvest, a private equity firm whose partners include Cavan dealmaker Seamus Fitzpatrick. Valeo’s chief executive is former Aer Lingus executive, Seamus Kearney.

“Schluckwerder is our first German acquisition and we expect to further grow our European business unit alongside our existing significant platforms in the UK and Ireland,” said Mr Kearney.