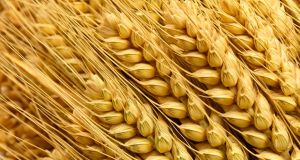 Much of the flour imported to Ireland from the UK is also now subject to tariffs of up to 50 per cent, due to the presence in it of Canadian wheat. Photograph: Getty Images

Post-Brexit problems have emerged in the shipment of goods from hubs in Britain used by major supermarkets and food companies due to the application of rules relating to where goods originate. Food products are often moved by major companies to such hubs for onward distribution to the British and Irish markets, and in some cases tariffs are now being applied on these products as they enter Ireland.

Meanwhile, further underlining the complexity of the rules of origin requirements, much of the flour imported to Ireland from the UK is also now subject to tariffs of up to 50 per cent, due to the presence in it of Canadian wheat.

Following the EU/UK trade deal most products can move between the British and Irish markets free of tariffs, or import duties, provided they meet rules relating to where inputs and components come from, known as rules or origin requirements.

However an anomaly has emerged in relation to goods coming into major UK distribution hubs used by some major multinational foods companies and some supermarket companies and suppliers. If these goods are just transiting through Britain and the loads are not broken up, then there is no tariffs problem. However typically they would be reloaded and redistributed from the major hubs and under current rules this means tariffs would apply if they go onward to EU markets such as Ireland , even though the goods originate in the EU.

Paul Kelly, director of Food Drink Ireland, the Ibec group, said this was threatening to disrupt well-established supply chains, which had been put in place to deliver foodstuffs at the lowest cost to consumers. The EU could decide to waive the requirement, given that the goods are originated within its borders, but there are no immediate indications that it will. If it continues, it will disadvantage EU producers in getting goods on to the UK and Irish markets.

Separately, the baking sector is facing difficulties as flour imports from the UK, necessary because of the shortage of domestic milling capacity, will in some cases now attract tariffs of up to 50 per cent. This is because the flour used for much of the bread baked in Ireland includes Canadian wheat and as this comes from outside the EU it means tariffs apply. Mr Kelly says the flour involved has a higher protein level and is popular in the Irish bread sector for the supply of fresh and par-baked products.

The developments highlight the risk that despite the Brexit trade deal consumers will face higher prices and possibly some shortages for a period as supply chains are rebuilt and new customs requirements bed in.