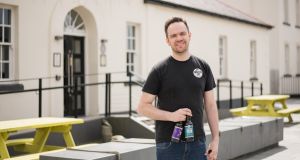 The Walled City Brewery is based in the rejuvenated Ebrington Square in Derry on what was once the British army barracks during the Troubles. James Huey opened this fully-operating brewery in 2015 on the same site as his restaurant making it the first of its kind in the country. He has since scooped 15 awards including best gastropub in Ireland 2017-2018.

4 Ireland’s Generation Rent: ‘After 12 years renting, I’d like my own front door’

7 No Irish howlers, but Prince Philip’s body language with McGuinness told a story

8 ‘I’m cheating on my husband with a married man – can we ever trust each other?’

12 How to build a modern man: Helping boys to grow up happy

13 Warmer weather to coincide with lifting of 5km travel restrictions

14 Aidan Turner: ‘That photograph. Yeah. It took away from the work’

20 Is your conversation with a therapist truly confidential?

24 Fintan O’Toole: I got a mortgage at 24 – unthinkable for today’s young adults

25 Trust trumps Zoom for Terry Hyland and his Leitrim exiles

26 US Masters: Hideki Matsuyama shines after the rain to take control

27 Covid-19 Vaccine Tracker: What's available in the Republic of Ireland and what else is coming?

32 David McWilliams: A female-led economy is coming – and it will be better

35 Leadership at issue as Fianna Fáil eyes prospects after pandemic

37 Belgium, France, Italy, US and Canada among 16 countries added to mandatory quarantine list

38 Emma de Souza: People in Northern Ireland have moved on, even if the politics have not

39 Prince Philip: Irascible, possibly unfaithful – and, since The Crown, so incredibly glamorous

40 The Mary Wallopers: ‘Folk was never supposed to be safe’