Deal is latest in series of acquisitions of British pub operators 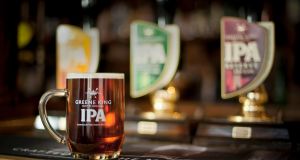 An investment group backed by Hong Kong billionaire Li Ka-shing agreed to buy UK brewer and pub operator Greene King Plc for £2.7 billion (€2.95 billion). The offer by CK Asset Holdings Ltd is equal to 850 pence a share, a premium of about 51 per cent to Greene King’s closing price on Friday.

The British company’s shares surged on Monday to as much as 865.8 pence. The deal is the latest in a series of acquisitions of British pub operators. Private equity firm TDR Capital – whose pubs include the Slug and Lettuce, Yates, and Walkabout chains – in July agreed to buy the UK’s EI Group Plc for about £1.3 billion.

The move by Li, whose interests range from telecommunications to real estate, comes as pubs shut down across the UK and the business faces growing challenges. These include a decline in beer drinking among younger consumers and the rise of alternatives for a night out – including cash-strapped millennials entertaining at home.

Prior to news of the takeover, Greene King had lost more than one-third of its value over the past four years. About one-quarter of pubs have closed in the UK over the past two decades, according to the Office for National Statistics. The sector remains profitable and cash flow-generating, and will continue to be an important part of British culture, CK Asset said in a statement.

Greene King has an established position as well as attractive real estate assets and a resilient financial profile, it said. The CK deal also follows Anheuser-Busch InBev NV’s sale of Australian beer assets to Asahi Group Holdings Ltd in a deal valued at about $11 billion. The Japanese company also recently acquired the beer business of Fuller, Smith and Turner. – Bloomberg

1 How can I view my dead brother’s will if I’m not the executor?
2 Provisional liquidator appointed to Dublin engineering firm
3 Investors pile into property as turnover in build-to-rent sector reaches €2.54bn
4 Mount Charles wins €10m catering contract at Maynooth University
5 Travel costs for IDA chief topped €45,137 last year
6 Glencore to shake up its top tier with younger leaders
7 Bursting of Tesla bubble a case of ‘not if, but when’
8 Germany drops opposition to fiscal boost in event of downturns
9 Kerry’s Chinese sales set for 30% hit from coronavirus
10 Bank of Ireland staff in line for 2.95% pay increase
Real news has value SUBSCRIBE