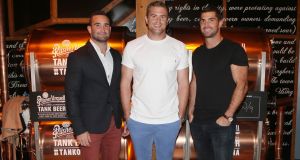 Two Dublin pubs co-owned by some of the biggest names in Irish rugby last year recorded combined profits of €415,876.

Accounts from the companies behind the Lemon & Duke off Grafton Street and The Bridge 1859 in Ballsbridge show that both pubs enjoyed a lucrative year in the 12 months to the end of February this year.

The co-owners of the pubs are Rob Kearney, Jamie Heaslip, Seán O’Brien and Dave Kearney. All have enjoyed success together playing for Leinster and Ireland, while injury last year forced Jamie Heaslip to retire.

The four embarked on the pub ventures with Noel Anderson.

Mr Anderson said: “I am very happy with the way things are going and business is even stronger this year at Ballsbridge.”

Mr Anderson said that 60 to 70 people are employed between the two businesses.

He said that the rugby stars “have busy lives and are active in the business up to a point. They let me run the business.”

Mr Anderson said that profits are stronger at The Bridge 1859 as the costs of operating a business in the city centre are higher.

The abridged accounts for Herbert Inns Ltd, which operates The Bridge 1859, show that accumulated profits increased from €855,801 to €1.12 million.

Separate accounts for The Inn on Hibernian Way Ltd, which operates the Lemon & Duke, show that its accumulated profits increased from €192,825 to €337,479.

1 Brexit: System agreed for Irish goods to skip checks on UK trade
2 High Court appoints interim examiner to Compu b parent company
3 How much do Irish people earn? And what will Covid-19 do to our wages?
4 David McCullagh announced as co-host of RTÉ Six One News
5 Ireland faces 'deep downturn' this year and may not rebound until 2024 if there is a second wave
6 Red tape logjam creates fear for Irish timber supply
7 Could your old car be giving away all your secrets to its new owner?
8 Why are markets booming when a crash is on the way?
9 Second Covid-19 outbreak and no-deal Brexit an appalling vista
10 Drumcondra credit union collapses as merger plan fails
Real news has value SUBSCRIBE