Average farm income in North down by £8,000 last year 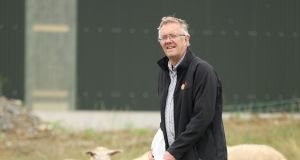 The North’s Department of Agriculture, Environment and Rural Affairs (DAERA) said provisional figures suggest the total income from farming dropped by £107 million during 2018.

The largest farming union in the North said the sharp decrease starkly highlights how important financial support is for farming communities.

The president of the Ulster Farmers’ Union Ivor Ferguson said the figures “must be a wake up call” in the context of Brexit.

“Look behind these and of the £360 million total income, £286 million was made up of direct support from Brussels through the CAP. That is why decisions on how this will be replaced after Brexit cannot be allowed to drift even further,” Mr Ferguson warned.

He said that the DAERA report also needed to be viewed in the context of how the decline in farming incomes last year had affected the North’s economy as a whole, as farmers had less to spend.

Farm business income fell in general across all farm types, with the exception of cereal farmers where incomes rose by 35 per cent because of higher grain and straw prices last year.

Pig farmers in the North suffered the biggest fall as a combination of lower pig prices and higher feed prices saw their income slump by 51 per cent.

But although total income from farming fell in the North last year the latest report also shows that total gross output for agriculture rose by 1 per cent to £2.13 billion during 2018.

Dairy farming accounted for the majority of this at £680 million, boosted in part by an increase in the volume of raw milk produced in Northern Ireland by 3 per cent to 2.3 billion litres last year.