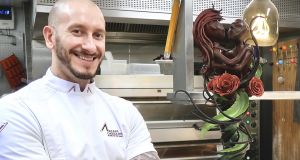 Belgian master chocolatier, consultant and owner of Arcane Chocolates Erik van der Veken: ‘I’m looking to establish a presence in a shop like Harrods, but until there is clarity on the import/export situation, I will be putting those plans on hold.’

Belgian master chocolatier, consultant and owner of Arcane Chocolates Erik van der Veken says the benefit of starting a hand-crafted chocolate business after Brexit was voted in, means he has a plan in place, but there’s still room for surprises.

Dublin-based van der Veken, who started his brand in partnership with Rocky and Ian Redmond of Redmond Fine Foods in 2019, sells his high-end chocolates to five-star properties and restaurants.

“We’re expanding to Butlers Pantry this year, and we also sell on an e-commerce platform, with plans to go global,” he says.

Having spent years learning his craft working in the Cafe Royal, and two Michelin starred The Greenhouse in London and building a chocolate cafe from the ground up in Jeddah, Saudi Arabia, the Belgian believes he can raise the bar for chocolate in his adoptive home, where he makes delicate creations for five-star hotels and restaurants.

His signature Arcane chocolates combine the finest Irish products from Yellow Spot Whiskey to butter from Glenilen Farm in Cork. But will Brexit get in the way?

Around 50 per cent of my clients for consultancy are based in the UK. It remains to be seen how that dynamic will shift after Brexit, it could mean that they want to look within their own borders for those services.

I also import packaging materials from the UK and certain ingredients that are harder to find locally. If my chocolates were to get stuck at the Border that would potentially mean a huge financial loss for me.

That said, I think it won’t be quite as bad as the picture is being painted by the media. I can’t see the UK drifting away completely from Europe.

Sad. As a European who has been lucky enough to travel quite a bit, I’ve become more and more aware of the huge benefits and freedoms that come with having a European passport. A lot of people aren’t quite so lucky and that’s only because of where they were born.

Europe isn’t perfect but I believe there is no part of the world that offers as much fair and equal opportunities as Europe. In terms of my business, I knew it would be affected, especially as the market in Ireland is very small and we rely on the UK for materials and clients.

How much do you rely on raw materials or markets north of the Border? And How much on Britain?

My signature bon bons, are very niche, so I order packaging materials from the UK. Obviously London is a hub for everything, including bespoke chocolate wrappers. Logistically it’s also easier to order from the UK. The price has been much more convenient for me, largely due to the relatively weak pound, compared to ordering from the European continent. My bespoke boxes for sales come from Holland so there won’t be any issue there.

When I first came up with the idea of creating these delicate signature chocolates, I had my sights set on exporting to the UK, but I have a global product. I’ve worked in the Middle East, a market I will be targeting, as well as the Far East. While the market for artisan chocolate is ever expanding in the UK, the market in China probably offers the biggest opportunity. The average Chinese eats 70g of chocolate per year, compare that to 12kg in Switzerland. It doesn’t take a genius to figure out how much growth potential there is in such a vast market.

Because we were at the pre-startup stages when the whole Brexit saga was playing out, we made sure to build our business in a way that we don’t need to be too reliant on the UK from the start. I expect a drop-off in consultancy work in the short term but, overall, I think we are ready. I’m looking to establish a presence in a shop like Harrods, but until there is clarity on the import/export situation, I will be putting those plans on hold.

No. Our chocolates are made with the freshest ingredients, and the raw ingredients have a relatively short use-by date. It’s not exactly feasible to be stockpiling. I use couverture from Cacao Barry which is manufactured in France, and it is my understanding they have put logistics in place to circumvent the UK if it’s necessary.

Other ingredients that I use such as glucose, dextrose etc come from a supplier in Spain that also has a logistical plan in place to deal with Brexit.

How do you think the Irish and British governments handled the Brexit negotiations?

It’s a bit ridiculous isn’t it? Too much ego, too little common sense. This really is a case where there are only losers and no winners in my opinion. I followed the whole thing for quite a while, but after two years of hollow shouting, posturing and finger pointing by the key figures I stopped.

I’m happy that there is finally a breakthrough so that we will know where we stand. I didn’t think Boris Johnson would pull it off if I’m honest.

It is difficult to say at this stage. Export is part of our longer term business plan, but I will follow the opportunity, wherever that may be.