Deliveroo aims to increase service to restaurants by two thirds 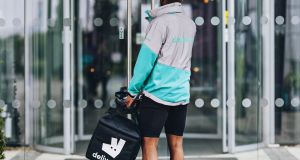 Deliveroo currently has about 1,200 restaurants on its books across the State.

Food delivery service Deliveroo set an ambitious target to increase the number of restaurants on its service by two thirds to 2,000 this year as it expands its footprint in the Republic.

The London-headquartered company said the plans to expand into suburban Dublin will see it reach an additional 100,000 consumers this year, adding to the 1.4 million it currently reaches.

The move will see it partner with an additional 800 restaurants this year, a 67 per cent increase in the number of partners compared to last year.

Deliveroo’s bullish targets follow a strong year in which it added 600 restaurants, 50 per cent more than it had originally anticipated. It currently has about 1,200 restaurants on its books across the State.

Privately held Deliveroo works in 13 markets in more than 500 towns and cities. The company, which launched in the Republic in 2015, works with more than 1,000 riders here to deliver from restaurants in Dublin, Cork, Limerick and Galway.

“2020 will be a significant growth period for Deliveroo in Ireland, ” said Michael Healy, Deliveroo’s general manager in Ireland.

“Building on the successes of 2019, our aim is to reach a further 100,000 Irish customers and on board an additional 800 new takeaways and restaurants. These are ambitious targets but I’m confident the company can reach new heights,” he said.

The publication of its growth plans come in a week in which shares began trading following the merger of its biggest competitor, Just Eat, with Dutch company Takeaway. com.

While the $7.8 billion (€7.09 billion) deal has been finalised, the approval of competition authorities is required before operations are merged.

The company has already agreed to partner with McDonald’s in Ireland and the UK, becoming its second delivery provider after Uber Eats.

The ramping up of competition in the sector has continued apace while Deliveroo has signed up retail giant Amazon, which has taken a minority stake. Britain’s Competition and Markets Authority has, however, opened a phase-two investigation into the deal which would see Amazon invest about $500 million in the company which was founded in 2013.

And while it invests heavily to enter new markets, Deliveroo is profitable here, recording profit before tax of €815,704 in 2018, the latest year for which accounts are available.

The business posted revenue of €9.2 million in the period, a more than 80 per cent jump on the year prior.