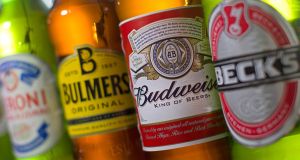 Diageo has tried to challenge the hegemony of Bulmers in the Irish market on a couple of occasions previously, without success. Photograph: Justin Tallis/AFP/Getty Images

Competition is set to intensify in the cider market, as Diageo plans the nationwide rollout of a new brand to challenge C&C’s Bulmers and Heineken’s Orchard Thieves.

Diageo is understood to be extremely close to the launch of its new brand, Rockshore Cider. Analysts at Goodbody stockbrokers told the firm’s clients on Wednesday that its research suggests Diageo is gearing up for another crack at the cider market. Industry sources consulted by The Irish Times confirmed that a launch is planned soon.

When asked to confirm that it is planning to introduce Rockshore Cider in Ireland, Diageo would say only that “as a policy, we don’t comment on rumours or industry speculation”.

Diageo, the multinational owner of Guinness, has tried to challenge the hegemony of Bulmers in the Irish market on a couple of occasions previously, but those attempts – including Hudson Blue and Cashel’s – gained little traction.

It launched Rockshore Lager as a new brand in the Irish market at around this time last year.

Jason Molins, an analyst with Goodbody, speculated on Wednesday that Diageo may look to launch the new brand around St Patrick’s Day.

He said the new brand would be “unhelpful” for publicly-listed C&C, whose share price fell 2.4 per cent on Wednesday: “It will no doubt cause some level of disruption in its domestic market, and is likely to weigh on investor sentiment.”

He noted that C&C is “less reliant” on the Irish market than it used to be, but it still accounts for about 35 per cent of group profit.

Bulmers is by far still the dominant brand in the Irish cider market, but Heineken has picked up a share of about 15 per cent since its launch in 2015. Its Appleman’s brand has yet to register such success, however.