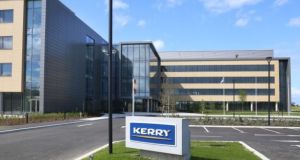 Kerry, owner of brands such as Denny and Dairygold, said volume growth was well ahead of its markets.

Kerry Group signalled on Tuesday that it has begun stockpiling raw materials ahead of Brexit, as chief executive Edmond Scanlon cautioned that weakening UK consumer sentiment on the other side of the Irish Sea is the main risk to his outlook for up to 10 per cent earnings growth this year.

Mr Scanlon, who took over as CEO in late 2017, made the comments to reporters as Kerry Group reported that its adjusted earnings per share rose by 8.6 per cent to €3.534 per share in 2018, excluding the effects of currency fluctuations.

While Kerry said that it anticipates that a “managed transition” will be the most likely outcome to Brexit negotiations, Mr Scanlon disclosed that the group is building up “weeks of stock” of raw materials in the UK and Europe in the event of the UK crashing out of the EU.

“Some of our customers are building out two or three months of stocks,” he added.

Group revenue increased by 3.1 per cent to €6.6 million last year, as business volumes expanded by 4.1 per cent in its key taste and nutrition unit, outpacing a 1.1 per cent uplift at it is lower-margin consumer foods business. Kerry Group’s overall pricing dropped 0.5 per cent as it passed on a decline in raw material costs to customers during the year.

While Kerry Group is forecasting earnings per share growth of between six and 10 per cent this year, the chief executive warned earlier on Tuesday in a conference call with analysts that the main risk to its outlook is UK consumers as they navigate Brexit. Consumer sentiment has ebbed in that market since late last year.

Kerry Group is also looking at restructuring its manufacturing network in the UK, where it has 25 facilities, as the retail sector continues to consolidate. This may ultimately lead to job cuts. It also plans to split its UK consumer foods business into products under its own brands and private labels for major retailers, Mr Scanlon said. The group has signalled that it expects to incur €30 million of related restructuring costs.

Mr Scanlon said that, while Kerry Group has spent millions of euro preparing for Brexit, a disorderly exit by the UK would have “grave consequences [for] the broader food market here in Ireland”.

Taste and nutrition generated €5.35 billion in sales and delivered a 0.2 percentage point increase in its trading margin, to 15.1 per cent. Consumer foods, where brands include Dairygold, Denny and EasiSingles cheese slices, posted €1.34 billion in sales, while its margin contracted by 0.6 points to 7.5 per cent.

Kerry spent €502.2 million on 10 acquisitions last year and agreed to spend a further €325 million on two deals. One of these, the purchase of US-based Southeastern Mills’ North American coatings and seasonings business was completed after the year-end. Kerry Group’s deals pipeline remains “healthy”, the chief executive said.