Shanahan’s on the Green fears impact of RCSI expansion 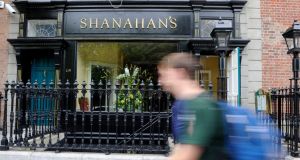 Shanahan’s fears “a negative and detrimental impact on the business and its viability” from construction of a new facility planned by the RCSI.

One of Dublin’s best-known restaurants has warned of the impact on its business from negative TripAdvisor reviews as a result of construction work next door on a new facility planned by the Royal College of Surgeons of Ireland (RCSI).

The RCSI, which has been based on St Stephen’s Green since 1810, has plans for an eight-storey “state-of-the-art” education and research building before Dublin City Council.

The Henry J Lyons designed building will replace the existing eight storey Ardilaun Centre, built in the 1970s and formerly the headquarters for Eircom.

In response to the RCSI plans, consultants for Shanahan’s on the Green have told Dublin City Council of their concerns over the impact the construction of the new building will have on its business.

They state that Shanahan’s has operated a very successful high-end restaurant since 1999 with a significant corporate and tourist customer base.

The consultants, Noonan Moran Architects, say that Shanahan’s is “concerned that the impacts will be to such a magnitude that they will have a negative and detrimental impact on the business and its viability”.

The submission notes particularly the possible requirement for “internal props” in the restaurant to help protect an exposed wall when the adjoining building is demolished and piling takes place to lay deep foundations for the new building over a period of months – a process “likely to take place over months”.

“These [props], if required, could have a devastating impact on the restaurant, its ambience and operation,” the report said.

It adds that “there is no doubt that the drilling of piles will be heard and felt” in the restaurant. The submission says that “constant pounding and vibration thuds from piling will not be acceptable to patrons and bad press or TripAdvisor reviews will be a deterrent which will affect the viability of the business”.

“We request that the applicant be requested to specify in some detail how they propose to control and manage the demolition, piling and construction stages and how they intend to protect and preserve the ongoing operation of Shanahan’s in this location during the years of work on the site.”

They also want the college to specify how it proposes to ensure the continue operation of the restaurant, including the safe and easily navigated access for patrons and for deliveries.

Stating that Shanahan’s is open for breakfast, lunch and dinner, the restaurant has urged that any approval should be subject to and the consultants have asked the council to prohibit piling during mealtimes and impose tight limits on noise levels on the site.

The application is also facing opposition from a number of apartment owners in Ardilaun Court on the basis of the massing and intensification of the proposed site and the consequent loss of light to the apartments.

The Cuffe Lane Resident Homeowners state they generally welcome the development but state that they also have serious concerns about the manner in which the proposed development is to proceed.