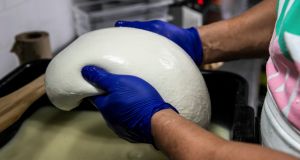 West Cork cheese producer Carbery is investing €78 million to diversify from its traditional focus on cheddar cheese into mozzarella.

Cheddar producers are especially exposed to Brexit risks as the product is only popular in the British and Irish markets.

Enterprise Ireland will provide €5.75 million in aid for the project following approval from the European Commission. The state aid payments are set to be made over a three-year period by Enterprise Ireland.

The company said the expansion of its Ballineen production facility would allow it meet consumer demand for other cheese varieties in emerging markets.

Carbery, which is owned by four Irish dairy co-ops, said the new plant would have the capacity to process four million litres of milk each day.

“I am delighted to have received this very positive news today following many months of engagement on the case. I met with Commissioner Hogan late last year, who has worked very closely with me to ensure that we got the green light today.

“Supporting market diversification is a key part of the government’s Brexit response and I would like to commend Carbery Food Ingredients for standing ready to pursue this important project,” the Minister said.

Carbery employs more than 600 people, and manufactures across eight facilities worldwide, including in Britain, the United States, Brazil and Thailand

Construction of the expanded facility is expected to be completed in early 2020.