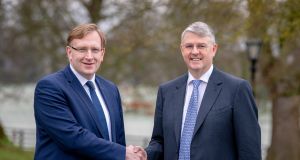 Glanbia Ireland plans to partner with a Dutch dairy producer to build a €140 million continental cheese-manufacturing facility in Co Kilkenny.

The Avonmore and Kilmeaden cheese-owner announced plans to enter a strategic partnership with Royal A-ware, a global cheese and dairy producer based in the Netherlands.

Glanbia Ireland is proposing to build the facility in Belview, near Kilkenny’s southeast border with Waterford, at which it will produce cheese like Gouda and Edam.

It plans to invest around €140 million for the “best-in-class” facility which is scheduled for commissioning in 2022, and will produce continental cheese in a variety of formats.

Glanbia Ireland expects the new facility to have a production capacity of 450 million litres of milk per year, creating 80 full-time jobs. A further 100 temporary jobs will be created during the construction phase.

Milk used in the production will be sourced from local suppliers, and the cheese will be marketed and sold to customers globally.

Mr Bergin added: “Since 2014 we have invested €343 million to facilitate a 42 per cent increase in milk production by Glanbia farmers. This proposed new investment is now required to diversify our product mix, and to ensure that our suppliers have the opportunity to fulfil their growth ambitions.”

In July 2018, Glanbia plc said it plans to open a new €130 million mozzarella cheese-manufacturing plant in Co Laois in a bid to bolster its position as Europe’s leading mozzarella manufacturer. For that plant, which is expected to begin production in 2020, the company partnered with US-based Leprino.

“Royal A-ware is taking another step towards achieving its goals of working with strategic partners to build innovative and sustainable agri-food chains, and offering its customers an enhanced product portfolio,” said chief executive Jan Anker.

The company, with revenues in excess of €1.3 billion, has six dairy processing facilities and over 2,000 employees. Glanbia Ireland, meanwhile, has 11 processing plants, over 1,800 employees and revenues of €1.8 billion annually.

1 Ryanair wants Irish courts to block Skyscanner from selling its flights
2 Are there annual limits on inheritances or gifts to a child?
3 Apple’s cash mountain, how it avoids tax, and the Irish link
4 Who are Ireland’s 17 billionaires?
5 Irish organisations struggle to comply fully with GDPR
6 Help, I’ve no PRSI stamps – can I still get a pension?
7 Petrel gets injunction preventing share sales by certain investors
8 Virus fears and corporate earnings take toll on markets
9 Smart energy company GridBeyond raises €10.5m
10 Looking to retire abroad? Revenue has just made it harder
Real news has value SUBSCRIBE