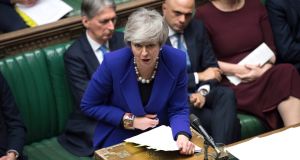 British prime minister Theresa May in the House of Commons on Wednesday. Photograph: Jessica Taylor/PA Wire

The UK’s attempt to reopen the Brexit negotiations only reinforces the need for a “legally robust” and “workable” backstop, Taoiseach Leo Varadkar has said.

Mr Varadkar reiterated the Government’s stance during a phone call with British counterpart Theresa May on Wednesday afternoon.

In a statement following the call, the Government said: “The Taoiseach set out once again the unchanged Irish and EU position on the withdrawal agreement and the backstop, noting that the latest developments had reinforced the need for a backstop which is legally robust and workable in practice.”

The statement also said the leaders had agreed to stay in touch over the coming period.

Speaking in the Dáil on Wednesday, Mr Varadkar said full regulatory alignment between Northern Ireland and the Republic was the only way to ensure there was no re-emergence of a hard border.

Mr Varadkar also said the UK had failed to specify any details about the alternative arrangements they wanted to replace the backstop.

“That is why we have the agreement that we have now because the only way I believe that we can avoid a hard border ... is through full regulatory alignment.”

MPs voted on Tuesday night to give Mrs May the backing to seek to replace the backstop with unspecified “alternative arrangements”.

Mr Varadkar also said the EU had no plans to hold an emergency summit following the outcome of the Westminster vote.

“A renegotiation is not on the table,” he said. “There’s no plans to organise an emergency summit to discuss any changes to the guidelines. Nor is there any pressure to hold one.”

European Commission president Jean-Claude Juncker described the agreement reached after 18 months of negotiation last November as “the best and only deal possible”.

And he told MEPs in the European Parliament in Brussels: “The debate and votes in the House of Commons yesterday do not change that.

“The withdrawal agreement will not be renegotiated.”

Mr Juncker said he would stay in close contact with Mrs May and would “listen to her ideas”.

But he added: “I will also be extremely clear about the position of the EU. Yesterday’s vote has further increased the risk of a disorderly exit of the UK.”

Tuesday’s Commons vote demanded the replacement of the backstop with “alternative arrangements” to avoid a hard border on the island of Ireland.

But the EU’s chief negotiator Michel Barnier told MEPs that “no-one, on one side or the other, can say very clearly and precisely what form these alternative arrangements will take”.

Insisting that the plan remains “at the heart” of the EU’s efforts to protect the single market, Mr Barnier said: “The backstop is part and parcel of the withdrawal agreement and this agreement will not be renegotiated.”

The prime minister’s spokesman said: “The EU had said it was seeking clarity — there had been suggestions that the backstop was not the main issue of concern, which had originated in Brussels.

“I think yesterday a clear message was given by the House of Commons that the backstop is the concern which MPs have, and that if we can find a way to address those concerns that there is a stable majority for getting support for the deal in parliament.”

Mrs May met privately with Jeremy Corbyn to discuss the way ahead, after clashing with the Labour leader at Prime Minister’s Questions in the Commons.

Having boycotted earlier cross-party talks, Mr Corbyn said he was ready to discuss a “sensible” approach to Brexit after MPs voted on Tuesday night to rule out no deal.

Following the meeting, Mr Corbyn said he is “suspicious” that Mrs May is trying to “run down the clock” on Brexit.

He said the pair held “serious” talks which were “exploratory on the issues” and he “set out the Labour case for a comprehensive customs union with the European Union in order to protect jobs in this country”.

But he warned: “The whole process looks like it’s running down the clock by saying well it’s either the problems and the difficulties of no deal or support a deal that’s already been rejected by the House of Commons.

“I’m suspicious that there is a programme of running down the clock here.”

In the Commons, Mr Corbyn demanded to know which of her red lines Mrs May was prepared to compromise on in order to avoid a no-deal Brexit.

“It really is time that the prime minister acknowledged she has got to move on from the red lines she put down in the first place,” he said.

But the prime minister told Mr Corbyn he had opposed “every move by this government to get a deal” and “he is the one risking no deal”.

In dramatic scenes on Tuesday night, MPs voted by a margin of 317 to 301 to back a plan — the “Brady amendment” — which requires the prime minister to replace the agreement’s controversial backstop with “alternative arrangements” to keep the Irish border open after Brexit.

Mr Barclay said the UK was “exploring in terms of the use of technology... looking at things like the time limit” to deal with the backstop.

Downing Street has suggested that the UK’s position could involve a time-limit or exit clause to the backstop or swapping it for a free trade agreement, as proposed in the so-called Malthouse Compromise drawn up by MPs from the Tories’ Remain and Leave wings.

French President Emmanuel Macron said the withdrawal agreement was “not renegotiable”, while a spokesman for German Chancellor Angela Merkel said that reopening the deal was “not on the agenda”.

Germany’s foreign minister, Heiko Maas, said: “Germany and the entire Union are firmly on Ireland’s side. We will not allow Ireland to be isolated on this issue.”

French Europe minister Nathalie Loiseau said: “The withdrawal agreement that is on the table is the best possible agreement. Let us not reopen it.”

Brexiteer ringleader Jacob Rees-Mogg made clear on Wednesday that he remains prepared to see the UK leave without a deal on March 29th if the EU refuses to reopen negotiations.

“If (the EU) think the withdrawal agreement is non-negotiable then we will have to leave without an agreement,” he told TalkRadio. “Do they want the £39 billion, do they want an agreement... or us just to leave? It’s up to them.”

Conservative former Cabinet minister Sir Oliver Letwin said he did not think it was “at all likely” that Mrs May would succeed in getting changes to her withdrawal agreement.

He told BBC Radio 5 Live: “If you were a betting person, would you bet two weeks from now that she is going to come back with something that will obtain a majority? I’d have to say, I wouldn’t bet on it, no.” - PA