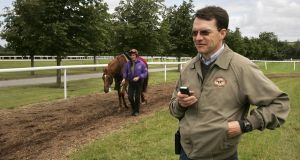 The Government has eased rules regulating the hours worked by racehorse trainers’ staff ahead of one of the industry’s busiest weeks.

Ms Doherty signed an order that defines racehorse training as agriculture under the Organisation of Working Time Act, 1997, easing rules requiring employers to allow staff 11 consecutive hours off in every 24 and at least 15 minutes in every four hours, 30 minutes.

This allows racehorse trainers to defer breaks to which workers are entitled under the Act, once the staff are needed continuously or there’s a foreseeable surge in activity.

However, employers must give workers compensatory breaks at the first reasonable opportunity.

The change takes immediate effect and comes on time for Christmas, when trainers are gearing up for race meetings in Leopardstown, Limerick and Down Royal.

“It allows some flexibility for employers during the year, strictly on the basis that compensatory rest arrangements are entered into and offered,” he said. “The industry is very much tuned into that.”

HRI and other industry bodies had warned the Government that failing to include racing in the agriculture exemption would cost jobs, as otherwise the cost of complying with Act would force smaller trainers out of business.

Ballydoyle Stables last month dropped a District Court appeal against a Workplace Relations Commission finding that it had breached the legislation.

The operation, regarded as the world’s best flat racing stable, argued that it was entitled to the agriculture exemption.

Inspectors found that in May 2016 some exercise riders and grooms in Ballydoyle had worked 19 hours in a day.