Aryzta accused of ‘too little urgency’ in tackling problems 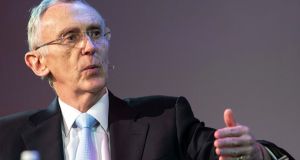 Investor advisory group ISS has recommended Aryzta shareholders back the company’s proposed replacement for outgoing chairman Gary McGann at next month’s extraordinary general meeting, but has accused the company of doing too little to tackle its various problems.

It said the troubled Swiss-Irish food group, which owns the Cuisine de France label here, had delivered poor operating and stock price performance over an extended period, and had treated the dissident shareholder group with disrespect by delaying the timing of next month’s meeting.

Aryzta has been struggling to halt a decline in earnings, particularly in the US, and negative investor sentiment towards its complex capital structure. Its shares are down 80 per cent since 2018.

In a bid to quell shareholder disquiet over the strategic direction of the group, the company has, among other changes, lined up Andreas Schmid, the former head of Swiss-Belgian chocolate giant Barry Callebaut, as a replacement for Mr McGann.

Disgruntled shareholder groups led by Swiss group Veraison and Aryzta’s largest investor Cobas are, however, attempting to oust the current board in a bid to reverse the decline shareholder value. Both sides are set for a showdown at next month’s egm.

ISS has weighed in, recommending shareholders back the company’s proposed replacement for Mr McGann and vote to keep chief executive Kevin Toland and chair of the remuneration committee Annette Flynn, the company’s preferred candidates, on the board.

However, it is also recommending shareholders back the election of Veraison candidates Urs Jordi and Heiner Kamps as independent candidates to the board.

In an advisory ahead of next month’s egm, ISS said: “Given the dissident’s compelling case for board changes and the resignations of McGann, [] Flinter, and [] Watter, shareholders are advised to approve the election of dissident nominees Jordi and Kamps as directors and the election of management nominee Schmid as board chair.”

“The appointment of these three new directors to a reconstituted 11-member board will likely add relevant experience and refresh the board dynamics,” it said.

“However, pre-Covid-19, the company had not delivered significant improvements in operating performance,” it said.

“The Covid-19 crisis has exacerbated the company’s challenges and prompted the board to open a strategic review,” it said. The company hired investment bank Rothschild to carry out a “strategic review” of the business in May, the results of which have not been made public.

ISS also admonished the board for delaying next month’s egm.

“By delaying the timing of the egm requested by the dissident, the board has shown little respect for shareholders’ rights, adding to the history of shareholder frustration created in the context of the recapitalisation plan in 2018, which was only approved by a narrow margin,” it said.

On foot of the review, Aryzta said last month it had received approaches from several unsolicited parties interested in taking over the group.

In a brief statement, the company said it noted the ISS recommendations.