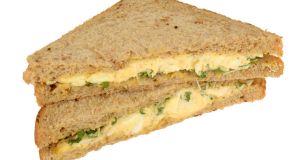 Workers at a Greencore sandwich factory in Northampton that is at the centre of a coronavirus outbreak were told they would be paid less than £100 a week if they had to self-isolate.

Workers at a Greencore sandwich factory in Northampton that is at the centre of a coronavirus outbreak were told they would be paid less than £100 (€111) a week if they had to self-isolate, making it difficult for many to comply, their representatives have claimed.

Bosses at the Greencore site, where M&S sandwiches are prepared, acknowledged that many staff were entitled to no more than the statutory sick pay rate of £95.85 (€106) if they followed instructions to self-isolate.

“Statutory sick pay does not support people and, in a crisis like this, you can’t expect people to try to survive on £95 per week,” said Ian Hodson, the national president of the Bakers, Food and Allied Workers Union, which represents staff at the site.

He said the policy of only paying statutory sick pay applied to many people who were on minimum wage and unable to build up any savings that would help them through, while more generous company sick pay terms were available to some of their colleagues.

Mr Hodson also referred to the case of two employees who, he said, were fired after travelling to work together when at least one of them was suffering from Covid-19. While his union does not claim they were justified in coming to work, he criticised the policy of paying staff so little while they were self-isolating, saying it may have contributed to their decision to flout the guidelines.

It emerged last week that 292 people working at the site had tested positive. Greencore said it had taken the decision to proactively test staff after a spike in cases emerged in the east midlands town.

Referring to the two complaints, a Greencore spokesman said: “In the event that colleagues have had to self-isolate, they have continued to be paid in line with the terms of their contract. This ranges from full pay to statutory sick pay, depending on the type of contract.

“In a very small number of cases where there have been direct contraventions of government policy with regard to self-isolating, which have put other colleagues at risk, we have unfortunately been obliged to take disciplinary action.”

The company added: “Ever since the Covid-19 epidemic started to have an impact on our business, we have worked tirelessly to keep our people as safe as possible. – Guardian