Cawley decision to holiday in Italy showed a lack of judgment

Cantillon: Kerry businessman Kennelly one of the few to defend former Ryanair boss 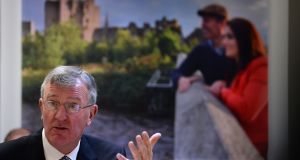 Michael Cawley: leadership is about more than following the letter of the law; it is about judgment. Photograph: Dara Mac Donaill

It’s when things go wrong that you really find out who your friends are. Former Fáilte Ireland chairman Michael Cawley has found precious few defenders since it emerged that he was holidaying in Italy with his family as the Government, health chiefs and the tourist sector were exhorting the Irish public to staycation this year.

Jerry Kennelly, the Kerry businessman who made his name selling his Tralee-based stock photography business to Getty for €110 million in 2006, said Ireland would be a big loser from the affair.

He described the former Ryanair deputy chief executive as a “superstar of Irish business, a leader who has generously shared his extensive domain experience as chairman of Fáilte Ireland for six years”.

“If one could hire him as a consultant to have the benefit of his wisdom for a day, I’m sure it would cost a lot more than the €21,000 annual stipend which he has received from Fáilte Ireland,” Kennelly wrote in a LinkedIn post, describing the pay for the State role as a “pittance” and the decision by tourism minister Catherine Martin to “put a gun to his head” as “petulant”.

He noted that Cawley operated within the Government’s green list of countries when he holidayed in Italy and that he didn’t break any laws.

All of which is undoubtedly true – leaving aside the allegation of petulance. But leadership is about more than following the letter of the law; it is about judgment.

There have indeed been mixed messages about travelling abroad to green list countries but, as Kennelly himself accepts, Irish tourism is in a moment of crisis. It does indeed need our cleverest talents to guide it, but it needs them to display some awareness as well.

As one respondent to Kennelly noted: “In public life it’s all about the optics and in this case it was a stupid decision to holiday out of the country especially now.”