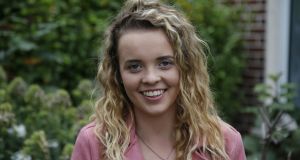 Rebecca Carter: won a landmark case in the High Court after her points were inaccurately added up. Photograph: Nick Bradshaw for The Irish Times

The Minister for Education is to argue that no individual has a right of access to higher education in an appeal against a landmark ruling in favour of a Leaving Cert student whose points were incorrectly added up.

Last September, the High Court ruled in the Rebecca Carter case that “in the modern world, it is difficult and in some cases impossible to earn one’s livelihood without access to higher education and vocational training”.

“The recognised Constitutional right to earn a livelihood would be meaningless without the concomitant recognition of a right of reasonable access to available higher education and vocational training, commensurate with the ability of the citizen,” Mr Justice Richard Humphreys found.

He also found that a right to access higher education was provided for in international law and there was no reason to acknowledge only some scaled-down “bonsai version” of rights for Irish citizens.

However, appeal documents seen by The Irish Times which have been filed on behalf of Minister for Education Joe McHugh show he will argue that no such right exists.

The documents claim that the High Court erred in law by finding the existence of an “unenumerated right to access higher education” and say no such argument was made during the legal proceedings.

“The findings of the High Court, as appealed, have broad implications and will most likely result in others initiating proceedings in reliance on those findings,” the document states.

“The Minister is anxious to bring legal clarity to the issues he has sought to appeal . . . in advance of the allocation of places for higher education or vocational training for the academic year commencing in autumn 2019.”

The appeal, deemed a priority case, is due to be heard by the Court of Appeal in April.

A spokesman for the Minister confirmed the department, along with the State Examinations Commission, was appealing certain “broad constitutional and legal issues” raised by the judgment.

“The Department and the SEC believe that the judgement contained findings in relation to a Constitutional right of access to higher education which did not previously exist and is not correct in law,” he said.

Following Ms Carter’s successful challenge, a new, faster Leaving Certificate appeals system is being put in place for 2019, with the process taking five weeks instead of eight.

The spokesman said Mr McHugh wished Ms Carter every success in her veterinary studies and whatever career path she takes.