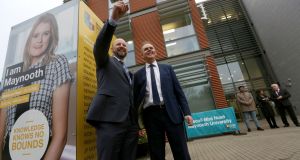 International recruitment agencies are offering Irish trainee teachers thousands of euro up-front to move abroad to teach in subjects such as science and maths, according to academics.

Dr Majella Dempsey of Maynooth University’s school of education said there was intense competition to hire new graduates due to shortages of qualified teachers in the UK, Australia and elsewhere.

“We’re finding that recruitment agencies are practically camped outside the college and we’re getting bombarded with emails,” she said.

“They are walking into jobs if they want them. Some are offering sweeteners, such as €5,000 up-front to relocate.”

The development comes at a time when Irish schools are also reporting acute shortages of secondary teachers in areas such as maths, science and modern languages.

In response to demand, Maynooth University is expanding its number of teacher education places and is setting up the first BSc in computer science and mathematics education.

The move dove-tails the introduction of computer science onto the Leaving Cert curriculum for the first time.

The course will begin this September for between 10 and 20 students and the first qualified graduates are expected to be ready to enter the teaching world in June 2024.

A total of 40 post-primary schools nationwide are now offering computer science on a pilot basis, with the first students to take computer science as part of the Leaving Certificate exams in 2020.

Dr Dempsey said the four-year BSc degree is a concurrent degree in which maths, computer science and education will be delivered in an integrated way.

Students will have access to an optional fifth year to become a fully qualified teacher.

Dr Dempsey was speaking following the opening of a new €14 million school of education at the university on Thursday.

It is providing capacity for the rapid growth in student enrolment to the university’s three education departments, which has expanded from 700 to 1,400 since 2014.

“This new home for teacher education and education research at Maynooth will enable the university to continue to build upon decades of outstanding work by our academics and graduates, whether in the classroom, as school leaders, or as policymakers.”

It was formally opened by Minister for Education Joe McHugh, who graduated from Maynooth with a higher diploma in teaching, and Minister of State for higher education Mary Mitchell O’Connor, who also graduated with master of education degree.

Mr McHugh said the university has been a “beacon of leadership” in teacher education for generations and continues to innovate to show us the way into the future.