Trials of modern parenting: How pushy should mums and dads be?

Many activities or none? Experts advise on how to meet your child’s potential 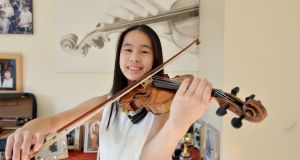 Daimee Ng (14) was just three years old when her mother enrolled her in structured violin classes. ‘I don’t feel I’ve made sacrifices as it has brought me so much pleasure,’ she says. Photograph: Alan Betson / The Irish Times 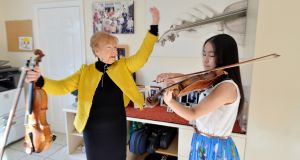 The row was expected, but the violence was not. “This parent had been on the sidelines for over a year, convinced his son was the next Ronaldo,” says a children’s soccer coach, who asked not to be identified.

“He had him in all sorts of academies and programmes. Then, when he didn’t like my decisions, he had a go. It got heated and he shoved me. . . He did apologise but we had to talk to him about his expectations and his behaviour.”

Hothousing is a term commonly used to describe educating a child to a high level at an earlier than usual age, or where a parent excessively manages scheduled activities for their child – whether music, sport, drama, extra tuition or something else entirely – leaving little time for free play.

It’s a contentious word that can carry a sting of criticism and disdain. But, in a world where “playdates” are organised and children’s fun is increasingly structured, is there a risk that some parents can be too pushy?

Of course some children need a push to get off the couch and challenge themselves, and Kumon is just one of the ways parents seek to give their offspring a leg-up.

In Ireland, more than 2,500 children take part in the Kumon supplementary education programme, which involves filling out daily numeracy and literacy worksheets. It’s a popular option, having expanded from just over a dozen Irish franchises in 2012 to 23 in 2019.

The company was founded in the late 1950s in Japan and, today, it says that more than four million students in almost 50 countries take part in its programmes. A significant proportion of the children taking part in Ireland hail from families with non-Irish backgrounds including Pakistan, India and China.

Kumon says its programmes “empower students to learn for themselves and build independent learning skills” and that it is useful for both academically gifted and academically struggling children.

Kumon really, really does not like the word “hothousing”. The Irish Times asked for details of how their programme works, what sort of commitment it involves, whether it was affordable to families on lower incomes and if they could refer us to any studies which showed its benefits.

We don’t use the word “hothousing”, a UK-based spokesperson for Kumon said. After this, they did not provide any further response to any queries.

Peer-reviewed studies of Kumon present somewhat mixed research findings, with some investigators suggesting it is of limited value, particularly for younger children, and others saying that it can help improve a child’s learning outcomes.

Parents – particularly mothers – always face judgement: get your child involved and you’re pushy; let them make all their own decisions and you’re lazy.

“Is it ‘hothousing’ or is it responding to the needs of a gifted child?” asks Dr Jennifer Symonds, an assistant professor at UCD’s school of education.

“Many gifted children flourish when they receive additional creative or academic stimulation through activities that are not available in the school day.

“It also depends on the child’s age when the high expectations begin and whether they see themselves as having a voice and agency in steering their own development, or whether they should accept instruction from a parent or school without question.

“Before the age of about eight or nine, a child may have a negative emotional reaction but feel unable to express it.”

Dr Mark Smyth, a clinical psychologist and president-elect of the Psychological Society of Ireland, agrees that a child-led approach is key.

“I have met more young people whose intellectual ability has not had the full range of enrichment opportunities. But there are definitely parents with unrealistically high expectations and who want more than the child is ready for.

“You want your child involved in extracurricular activities: what that is should be up to them although they do need to stick with it.”

If the weekend has six different activities, this can be equally stressful for parent and child, says Symonds.

“And if they’re pushed into it, they may not want to do it. There is pressure on parents to give their children the best opportunities but, in early childhood, play is the most important thing they can be doing.

“Play is how children learn fundamental social and emotional competencies. If they’ve no time for unstructured play, they miss out.”

While most extra-curricular activities cost money, she says it’s not always the case: visiting a gallery, for example, may be more valuable than extra tuition.

Smyth, meanwhile, says parents are often unfairly judged or labelled, when it is the child who is pushing themselves.

“My own seven year old really likes extra workbooks. What matters is that the activity is child-led and they find it enjoyable. As long as they’re still mixing with friends and being active, that’s okay,” he says.

“The pushy parent is increasingly rare: today, parents are very tuned into mental health concerns and don’t want to overburden their children.”

Daimee Ng was just three when her mother Amy enrolled her in structured violin classes.

Now 14, Daimee is a second-year scholarship student in The High School in Rathgar, has made the finals in prestigious international competitions and is looking toward a career as a musician. Has it been worth it, or is it too much pressure?

“None of us played an instrument but, as a little baby, Daimee was clearly interested in music,” says Amy.

“I had trouble finding a teacher who would take a three year old for instrumental lessons. I found Maria and she did an assessment. I thought we’d do a term and see how it went.

Maria Kelemen, founder of Young European Strings, a busy and successful music school in Templeogue, says assessments depend on the child.

“We don’t assume the child should play any particular instrument: it’s important to respect the child’s choice. My assessments are all age-appropriate and they help me understand the child and what they want,” says Kineman.

“I love performing, being on stage and playing with other people. I don’t feel I’ve made sacrifices as it has brought me so much pleasure. I set aside time for the violin every day and, when it’s over, I focus on something else,” she says.

“When I was in primary school, I would easily devote at least an hour a day. It has taken a bit more juggling with the time demands of secondary, but I don’t have a lot of social media apps and I leave my phone downstairs while I work.”

Her mother Amy, who was 10 when her family moved here from Hong Kong, says people assume she is a “tiger mother” because of her Chinese heritage and because her daughter is doing so well.

“Nobody mentions a ‘tiger dad’. In this case, Daimee is the one pushing me. She doesn’t like to be idle and wants to be challenged with more work and difficult pieces. I don’t push her into competition.

“There is some juggling to be done, but practice and work can be built around parties and playdates. It’s about timing, not sacrifice.”