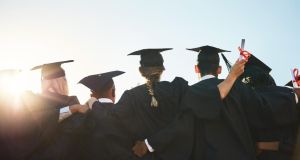 A total of 78 per cent of graduates are in employment or due to start a job nine months after leaving college, the latest figures show.

Is it really worth your while going to college?

After the soaring cost of accommodation, the hefty fees and hard academic slog, you might be forgiven for wondering whether it really pays off to have a higher standard of education?

The latest figures from the Higher Education Authority (HEA) on the destinations of graduates are unambiguous. Those who complete third level have a better chance of getting a job and of being paid well for it.

The figures indicate there is also a strong argument for graduates in certain fields to continue their educational journey to postgraduate level and beyond.

It is clear from this report that the ongoing economic recovery is leading to much improving employment prospects for graduates.

Overall, a total of 78 per cent of graduates are in employment or due to start a job nine months after leaving college.

The remainder are mostly in either further education or travelling; just 5 per cent are seeking employment. Of those at work, some 90 per cent are finding work at home.

While the data in this year’s report isn’t strictly comparable to last year due to a change in methodology, one thing is clear: these are the kind of indicators we last saw during the the heady days of the economic boom.

For those who stay on in education to master’s or doctoral degree level, there is a significant earnings premium.

Earning data shows students who stay on in college to study for postgraduate qualifications such as PhDs stand to earn about €8,000 more than than average graduates.

Jim Miley, director general of the Irish Universities Association, says the outcomes confirms the “clear added value” of higher education for society and for individuals, in terms of both employment opportunities and graduate salaries.

Given the earnings boost of which third level affords, some might argue that it also vindicates our policy of sending ever more school-leavers into higher education.

However, as last week’s study by the HEA shows, this doesn’t always hold true.

There are alarming dropout rates in some colleges and courses, especially those with low CAO points in computing and engineering.

There is a strong argument that some may fare better in more hands-on options such as further education or apprenticeships, which also offer starting salaries on a par with college graduates.

If there are any alarm bells in this report, they seem to be ringing for arts and humanities graduates.

They have consistently recorded lower earnings and employment levels – at all levels of qualification – although many are progressing on to further studies or training.

Many also argue that due to the nature of arts and humanities degrees it just takes a bit longer to find work linked to your qualification.

There is also a question mark over the quality of work in some areas. For example, despite high levels of employment, many education graduates say they are engaged in temporary, substitute or part-time teaching in Ireland.

Notwithstanding this, the picture painted in this latest report is overwhelmingly positive: starting salaries are rising, employment rates are climbing and emigration is going down.