Of working graduates, 90% find employment in Ireland with average starting pay at €33k 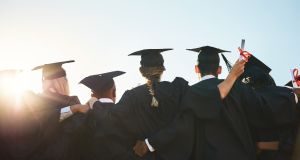 Overall, 78% of the class of 2017 were in employment within nine months of graduation.

The vast majority of college graduates are opting to stay and find work at home, new figures show. Overall, some 78 per cent of graduates from the class of 2017 were working nine months after graduating, figures not seen since the height of the economic boom.

Of those at work, some 90 per cent found employment within Ireland on average starting salaries of €33,574.

In a boost for the economy, the bulk of international students (62 per cent) are also choosing to stay and find work here.

Earning data shows that students who stay on in college to study for postgraduate qualifications such as PhDs stand to earn about €8,000 more than than average graduates.

Overall, the mean salary for an honours degree graduate is about €29,600.

For example, the average starting salary for a graduate with a higher certificate was €32,845, while it rose to €34,348 for an ordinary degree holder.

When broken down by geography, the highest average salaries were reported by those employed in the Dublin area.

There is also evidence of a gender gap in salaries, with men earning more than women.

This is despite the fact that women are more likely to secure higher grades at the end of college.

While this corresponds to a gender pay gap of 11 per cent, this reduces to about 4 per cent when the field of study and age is controlled for.

The figures also indicate there is a premium attached to graduating from a university compared with an institute of technology.

University graduates earn €2,676 more a year on average compared with institute of technology graduates, when controlling for the field of study.

However, there was little difference in employment outcomes based on the institution attended.

University graduates and institute of technology graduates were just as likely to be employed (78 per cent).

Also, male and female employment prospects were similar with 78 per cent of graduates of each gender employed nine months after graduating.

The survey also contains a detailed analysis of education graduates for the first time, broken down into early years, primary and post-primary.

Of these groups, those in early years earned the least, typically €20-25,000. Primary and post-primary teaching graduates earned more, typically €30-35,000.

Employment rates were particularly good for all education graduates. Primary teaching graduates were the most likely to be working (96 per cent), followed by post-primary (89 per cent) and early years (84 per cent).