The pros and cons of studying abroad

As numbers of students choosing to study abroad increase, we look at the options 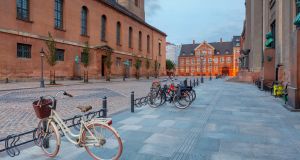 There are 1,400 degree courses taught through English around Europe with the majority of them in the Netherlands, which is the number one destination for Irish students, with Poland, Denmark, Italy and Germany also popular. Photograph: Getty

In a country obsessed with the points race, it can be jarring to discover this is not how everyone operates.

It was for one parent who asked at an event earlier this year where European universities were demonstrating their offerings, how many points their child would need for a particular course. They were told by an Italian professor, “I don’t care, I’m more interested in how they think.”

The number of Irish people going abroad for university has risen considerably over the past number of years. While just five years ago students were applying to European universities as a back up for their CAO choice, increasingly it’s the other way around, says Guy Flouch director of Eunicas, an organisation that supports and advises students who go abroad.

Many European universities rank higher than those in Ireland and have excellent reputations. For example, this year’s Google Science Fair winner Fionn Ferreira from Co Cork chose to study at Groningen University in the Netherlands, as he was attracted by its reputation for scientific study. Many other students are choosing European universities for similar reasons, along with the lower cost of living and the global experience they offer.

There are 1,400 degree courses taught through English around Europe with the majority of them in the Netherlands, which is the number one destination for Irish students, with Poland, Denmark, Italy and Germany also popular.

In Dutch universities, and in many European countries, points are not required and getting in is largely matriculation based with about 90 per cent of Dutch courses looking for six passes in the Leaving Cert, two at H4. Further, by law in the Netherlands, two of the criteria for selection have to be cognitive, be it an interview, personal statement or aptitude tests, etc.

Some courses, such as the physiotherapy programme in Hanze University of Applied Sciences, Groningen in the Netherlands, do not take grades into consideration at all, but have a selection procedure involving a questionnaire, going to a lecture, taking a test on it and then doing an interview.

The Netherlands has also introduced an obligatory process called Matching. This runs parallel to the admissions process and is aimed primarily at reducing drop out rates among Dutch students but applies to everyone. It can take the form a lecture and questions, an informal phone call, or a questionnaire. The faculty will then make a recommendation on whether they think the course is a good fit for the candidate or not. The university’s recommendation can be ignored, however, and the students can still enrol, but the institutes are also happy to refer the person to other programmes or universities that they think would be a better fit.

For those studying medicine in Italy for example, they will have to do an entrance exam of verbal reasoning, logical thinking, general knowledge and a multiple choice quiz. Generally, similar type entrance exams also apply to those studying veterinary, who will typically be required to have studied certain science subjects at Leaving Cert.

Fees can also be also a lot lower abroad and even non-existent in some counties. In Denmark and Sweden there are no fees for undergraduate or masters degrees, while in the Netherlands, fees for undergraduates and masters are €2,143 per year, but you are entitled to an interest free loan from the Dutch government as an EU citizen and you have 15 years to pay it back after you graduate.

Germany has no fees, while in Italy, which is increasingly popular for its medicine courses, the fee is means-based and the range of fees varies in each university. In Poland, fees differ for each course, from free, such as for the Aerospace Engineering degree in Warsaw, to €700 for nanotechnology in Lodz, to €10,000 for medicine in Bialystok.

The Susi grant can also be used by students studying abroad.

“It’s this quality, this accessibility through entry requirements and cost that underline the reasons why Irish students are studying abroad,” says Flouch. “They (the universities) are well resourced, there’s enough places as supply equals demand. In the Netherlands, say at a particular university, 222 people want to do anthropology, they have to create 222 places, so they don’t need points, whereas here, that’s not the case.”

As workplaces become increasingly global, studying abroad can also give an edge to your career prospects. “If you’ve got those international perspectives, those international networks, that is what employers are looking for,” says Flouch. “Secondly, with the level of independence, resilience and self-esteem you’ll get living abroad for three or four years, that gives you a profile that is attractive to employers.”

While recruiters are keen to attract foreign students to their universities, such degrees were not set up specifically for them. “These degrees were set up for Dutch students so they could compete in the international market where the main language is English, so we are taking advantage of their set up.”

Another appealing aspect of studying abroad is the choice of two types of universities; research and applied sciences. While the universities of applied sciences don’t rank as highly as the research ones, they are still very well respected and the main difference is a focus on employment, with practical projects, teamwork and internships as key features. Research universities are much more academically focused and text book-based rather than practical and degrees are three years rather than four.

While it may be easier to get into European universities, it is much harder to stay in and generally the academic side is much more demanding than in Irish universities, Flouch says. The drop-out rate among native students can be quite high due to the low entry requirements, however, although Irish students have a very low drop-out rate, they find the work tough, says Flouch.

“If you fail first year you’re out. You can’t repeat. You can carry a couple of modules into second year but each first year has a credit target and if you don’t reach it, you’re gone. The second thing is, almost everywhere in Europe you are there until the end of June, you have less time off at Christmas and Easter and you generally can expect to have approximately 15 weeks longer in the academic year. Each academic year is composed of four 10 week quarters rather than two 12 week semesters. That means that there’s no panicky end of year exams, everything is split between the four quarters, assessments and exams are at the end of each. It splits up the work and you know how you are doing as you go along. People are working hard from day one and you may have many more assessments than you’re friends at UCC or UCD, so you work hard. But a lot of students appreciate that. They appreciate their time being organised and scheduled with a lot of clear signposts going through.”

Subjects requiring a good grasp of maths can be challenging for some Irish students, says Flouch. “Be aware that if you are going into a research university to do something like business or psychology, statistics is in the first year and because the level of maths in Ireland is probably lower than most other EU counties, stats is the biggest challenge for most Irish students doing such programmes, it’s tough. If you want to do business and you don’t have higher maths, some of them (universities) insist on it. If you don’t have higher maths I recommend you go to a university of applied science and the good thing about that is, if you do a first year there and you pass it, you get a diploma and you use that diploma to get into the research universities so everywhere you look there is flexibility and accessibility.”

Will your degree transfer?

For those studying veterinary and medicine, your degrees are valid to work in Ireland and the UK, says Flouch. However, for those studying the law, it is not the best preparation for those interested in becoming a solicitor or barrister as abroad you will be studying civil law whereas Ireland has common law. “If you do a degree in the Netherlands you’d be at the same stage as if you’d done an arts degree in Galway. You still qualify to do the professional test but you don’t get the same exemption as if you’d done your law degree here. They are all LLB degrees but they are international LLBs.”

Similarly for those studying accounting, the system is different to that in Ireland so if you do study it abroad, you will be around two years behind and again you won’t have the same exemptions for professional accountancy exams as if you’d studied in Ireland. For those wanting to become solicitors, barristers or accountants, the advice is to stay put and study in Ireland.

Should you study abroad?

Not everyone will be suited to upping sticks and moving away from home, but Flouch encourages everyone to study abroad at least once, be it for a masters or for Erasmus. “Get that international experience, you can’t beat it,” he says.

Lorraine McKenna (27) from Monaghan, who is second year in Warsaw University studying veterinary medicine has found the whole experience of studying abroad has made her more independent. “You really have to motivate yourself over here. It’s great, you’re in the middle of Europe so it’s great for travelling. You get to experience a new culture, make lifelong friends. It’s tough at times but there’s a good support system, we’re a family over here.” McKenna was considering repeating her Leaving Cert to get enough points for UCD when her family farm’s vet suggested looking abroad. She is now one of 40 Irish students in her class of 60. While the course is very intensive, she is more than happy with her decision. “It’s the only way I was going to be able to do veterinary medicine. It’s my dream. I’m really glad this opportunity came up.”

For more information on studying abroad see eunicas.ie. For those interested in veterinary courses see eaeve.org/about-eaeve/members; medicine in Poland medicalpoland.ie; and medicine and veterinary in Hungary: studyhungary.hu.

What will it cost?

Travel: Flights to European destinations typically come in well under €100 one way depending on the time of booking. Trains or buses will typically required to reach the destination and the costs of public transport can vary greatly from country to country.

Netherlands: Depending on where you are in the country the cost of rent can typically range from €300-€450 with Amsterdam in the €400-€450 range.

Poland: Rents typically range from €150-€250 per month for university halls of residence and dormitory accommodation.

Denmark: In Copenhagen finding accommodation can be competitive and rents are typically about €400-500 per month. Outside of the capital, costs are about €300-350.