Is Ireland ready for a ‘total inclusion’ approach for special education? 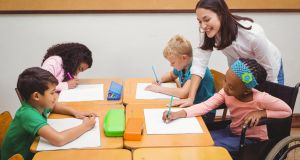 Last month the National Council for Special Education floated a bold idea: we should consider abolishing special schools and special classes and place all children in mainstream schools. regardless of their level of disability. Photograph: iStock

Last month the National Council for Special Education floated a bold idea: we should consider abolishing special schools and special classes and place all children in mainstream schools. regardless of their level of disability.

The council says Ireland may be in breach of a UN convention by “segregating” up to 16,000 special pupils and we should explore a model introduced in the province of New Brunswick in Canada.

But would such a move be in the best interests of children? Could the system ever hope to handle such a change? We asked two commentators argue both sides of the debate.

Former minister of education from 2010-2013 in the Canadian province of New Brunswick.

In New Brunswick, Canada all students are educated together in their local school. All means all and includes students with complex disabilities (physical, intellectual, learning), as well as indigenous/aboriginal students, newcomer learners, students from low socio-economic backgrounds, LGBTQ+ students and gifted and talented students.

New Brunswick’s decision to introduce fully inclusive schools was value-based because we believed it was the right thing to do for all our students.

When children learn together in schools they learn to live together in society and our public schools and classrooms must reflect what we want to create as a society.

The decision was evidence-based because research conducted in Canada indicated that students in special settings achieved less favourable longer-term outcomes than their peers in mainstream. Research findings also indicated that inclusion does not have a negative impact on students without special educational needs.

Our students learn together in one inclusive common learning environment

The decision was human-rights based and initiated by parents in the 1960s who didn’t want to see their children segregated on the basis of disability, similar to having witnessed the move away from segregated education for black children in the US.

In New Brunswick we have eliminated all mention of “special education” and we have no definition of “special needs” students. Instead, our students learn together in one inclusive common learning environment, shared among age-appropriate, neighbourhood peers, using one provincial curriculum that is provided equitably to all students and adapted where necessary.

We believe that the success of each student depends on the degree to which education is individualised, based on the student’s best interests and responsive to his or her strengths and needs.

Some students will require a personalised learning plan to identify the practical strategies, goals, outcomes, targets and educational supports necessary to ensure their success in learning, in line with their individual needs and abilities.

Sharing a common learning environment doesn’t mean that every student spends all day every day in the same class. All students may be withdrawn at certain times if they are gifted or pursuing university access; if they have social or emotional needs; if they need extra help with literacy; if they need mobility training. Their withdrawal must be governed by a pupil learning plan that must specify the plan for re-integration. But all belong to their local school and all are an equal member of their community irrespective of ability.

Team work is very important. In New Brunswick all staff are responsible for ensuring that all students learn. This means that class teachers are supported by the principal, school team, and by support from the district.

Parents play an important role in their children’s education and their expertise is highly regarded and drawn upon by the school. Where challenges arise, it is considered important to have trained advocates from non-profit organisations who can navigate the system for families and students and schools.

Student support is provided through a tiered model depending on student need.

Timetabling is flexible and teachers plan class work very carefully with the focus on developing student independence and using students’ interests to engage them in learning.

We have lots to work on, we are not perfect. Sometimes parents argue that the local school doesn’t work for their child because their needs are so complex and the teachers in the school don’t have the necessary skills. My response is always the same: if inclusion isn’t working then it’s not inclusion. The right approach is to change the school and problem-solve by working together, not move the child.

I would encourage parents, teachers, students and other partners to to consider the next steps needed to educate all your students together in their local school. Not only because this the right thing to do – but also because it is now your country’s legal obligation under the UN Convention on the Rights of People with Disabilities. It’s never easy to make important improvements, but I want to tell you, it’s well worth it.

In this report, it recommends that the State needs to consider moving to what is termed a “total inclusion model”.

This would possibly see all children placed in mainstream classes, regardless of their level of ability. It is clear that the NCSE has become an advocate for the model of education championed by the small Canadian province of New Brunswick.

Consider a few facts about the New Brunswick school system, completely missed in the NCSE report, before jumping on board.

Student numeracy, literacy and achievement levels paint a stark picture of the system and do nothing to instil confidence in this education model.

The official policy is “inclusion for all” in regular classrooms but it is far from universally accepted in the special education community.

A lawyer and autism parent activist Harold Doherty from New Brunswick is quoted as saying that “inclusion as a word. It’s a feel-good kind of a word. It sounds so good to everybody, but what we’ve not done in New Brunswick is take the approach of looking at how it works or doesn’t work for each student in the classroom.”

The Learning Disabilities Association of New Brunswick (LDANB) has also been critical of the policy. Fabienne MacKay, a long-time LDANB supporter, describes the total inclusion model as follows; “It’s a philosophy, not a teaching method.”

The NCSE report fails to reflect the voice of parents and pupils in New Brunswick, who feel that the total inclusion model has failed them.

The NCSE report also neglected to mention that two outgoing presidents of the New Brunswick Teachers Association criticised the model. They both claimed that the model was underfunded, making teaching far more challenging, and failing students, due to lack of resources.

While NCSE reported that other countries were looking at the model, it failed to mention that only one country is actually engaging with it. Portugal describes itself as “on the journey towards full inclusion”. One also wonders why other Canadian States have not adopted the New Brunswick Model.

The NCSE is now recommending a public consultation on “how to best move forward in the education of students currently being educated in special schools and classes.”

I believe such a consultation is premature and ill-advised. Special schools provide for access to education in centrally resourced settings. They are places where expertise is built up and used to its full potential and are an effective setting, as part of the overall provision of education for children with special educational needs. The possible closure of some or all of our special schools as a result of this initiative is also of serious concern.

The current system is far from perfect. CPSMA has repeatedly raised concerns around the underfunding of education in Ireland. For some time, CPSM highlighted concerns that the administrative workload on teaching principals is leading to unsustainable working hours and dangerously high stress levels. The worst affected group are principals of schools with special classes.

These principals, time and time again, report long waiting lists and delays in accessing suitable supports for pupils. This disturbing situation has led to the early retirement of many committed principals who love teaching but can no longer cope with the administrative workload. It has also caused significant problems in the recruitment of teaching principals.

On the basis of the evidence available, the New Brunswick model is not-fit-for-purpose and will potentially have catastrophic consequences on an already pressurised and overloaded system.

I urge all stakeholders, to participate and engage in robust debate on this issue, before critical decisions are made, which affect the most vulnerable children in our schools.

What we need is a fresh public consultation that is not tilted in the direction of adopting a model that is not working in practice. Let’s build the structures and find the resources to ensure that all children receive the best possible education, in the learning environment most suited to their needs.