Will Mandarin be the next global language?

Chinese is set to joint the Leaving Cert curriculum for the first time. But there are major barriers to it becoming a mainstream language in Irish schools 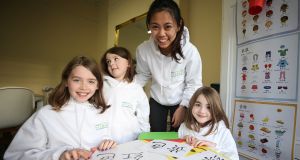 Chinese is the most-spoken language in the world, but its presence in Irish education has generally been peripheral.

From September 2020, however, the first cohort of Leaving Cert students are due to start learning the language in a number of schools across Ireland, with the first exam held in 2022. Meanwhile, Chinese language classes are growing in popularity for adults too.

So, just who is studying Chinese and, in a world where foreign language skills are in increasing demand, is it worth it?

Andy O’Donovan is chief executive of the Institute of Chinese Language and Culture (LearnChinese.ie), a private Irish company based in Dún Laoghaire, Co Dublin.

After learning some Chinese through the UCD Confucius Institute and then switching to a private instructor, he felt there was an opportunity for a company to provide Chinese language learning.

Last year, he formed a partnership with Hutong School in China to deliver Mandarin Chinese language lessons to adults and children. Since launching in May, O’Donovan says the level of demand took them by surprise.

“The queries were coming in fast and we had 30 students within a few weeks. Chinese is increasingly seen as an important language for global business – both multinationals and small-to-medium enterprises – and people understand that the country is a prominent player on the world stage.

“From speaking with many colleagues with business interests in China, the general consensus has been that [the introduction of] Mandarin on the Leaving Cert curriculum next year is much-needed. It is a signal that China is a key priority for Ireland.”

Group, evening and one-to-one classes are all available, with the company hiring native Chinese speakers to live and teach in Ireland. At the moment, they are mostly working with Dublin schools. The company doesn’t have any immediate plans to provide teachers for the new second-level curriculum, but O’Donovan doesn’t rule it out once the National Council for Curriculum Assessment finalises the curriculum and the Teaching Council sets out its registration requirements.

“We also provide Chinese language programmes to Irish companies, business executives, college students and graduates,” says O’Donovan. “We have been fully trained in a system that is optimised for western learners to enable them to communicate in Chinese.”

Confucius Institutes have been the main driver of the language’s growth in the western world, but they are tinged with controversy: critics say they lack transparency, suppress academic freedom and act as a propaganda arm of an authoritarian Chinese state, and that some academics avoid writing about issues relating to Taiwan, Tibet or human rights in China for fear of coming under pressure or risking valuable funding to their university.

Children under 10 pick up the language very quick. They don’t mind that it’s not as instantly familiar as English

On the other hand, the late Jackie Sheehan, a widely-respected professor of Asian studies at UCC’s Confucius Institute, was well-known for her criticism of China’s human rights records, and previously told this newspaper that academics “self-censor [on China] more than they need to.”

Confucius Institutes have been training non-native speakers in Ireland to teach Chinese language short and transition year courses in secondary schools, but a number of sources in the language education sector have raised concerns about whether that approach can adequately prepare those teachers to the level needed.

“Parents don’t necessarily know that their child is learning from an Irish person who has only done a night course and never set foot in China,” says one senior source in the language sector.

“Leaving Cert Chinese language teachers will probably be native speakers who have lived in Ireland and have adapted to how teaching is done here.”

LearnChinese.ie is keen to position itself as an alternative location for people to learn Chinese.

“We are aligned with a partner school in China which is accredited by their ministry for education. But, ultimately, people learn a language because they want to communicate in it. With respect to our competitor [Confucius], we are unburdened by any political motivations or restrictions on teaching methods and content.”

YuSyuan Chen, one of the Institute of Chinese Language and Culture’s teachers, was hired from Taiwan and has been in Ireland for two years.

“Children under 10 pick up the language very quick,” she says. “They don’t mind that it’s not as instantly familiar as English. Parents want their children to learn because they know they may be travelling or doing business in China, and links between the two countries are growing.

“As for children over 10 and adults, they do initially think it will be very difficult, but we have structured lessons to make them engaging and practical.”

Chinese joins the Leaving Cert: A fad or the future?

The new Chinese course will include grammar, language, some knowledge of written Chinese and elements of Chinese culture.

Last week, UCD launched Chinese as a Foreign Language in Post-Primary Schools in Ireland: Demand, Growth and Sustainability, based on surveys with principals.

The report identified a demand for Chinese in post-primary schools, with 74 schools (35 per cent of respondents) interested in introducing it as a Leaving Cert subject and 94 schools (41 per cent of the sample) offering one or more Chinese courses.

The Teaching Council is currently revising its criteria for teacher registration, but the UCD report highlights an impatience in the sector for the council to complete this process so that teachers can register and be paid by the State.

There is currently a short course in Chinese offered at junior cycle level but, to date, only nine schools offer it, with timetabling and funding – particularly in the absence of clear teacher registration routes – proving problematic.

Schools have been sent a circular asking if they are interested in providing any of the new languages.

The National Council for Curriculum and Assessment (NCCA), meanwhile, has published a draft Mandarin Chinese Leaving Cert specification which will be open for public consultation until January 6th, 2020.

A spokesperson for the Department of Education says the number of schools delivering the new languages will depend on the outcome of this.

Insiders believe most Chinese teachers at Leaving Cert level will either be native speakers or Irish people who have studied the language to degree level and perhaps lived in China for some time; at present, 63 per cent of teachers are native Chinese speakers.

Evan Furlong, principal teacher at the Dublin School of Mandarin Chinese and one of the authors of the recent UCD report, sits on the NCCA’s subgroup.

“It could also be hard to get schools to introduce this subject to students who have already been learning a European language such as French, German or Spanish for four years,” says Furlong.

“But from my masters research, there were about 21 teachers on only about two to three hours a week, and keen for more work – although there could be issues in recruiting teachers outside Dublin or in some rural areas.”